Today marked the final stage of the 22-day Tour de France with Spaniard Alberto Contador crossing the finish line first at the Arc de Triumph, but these aren’t the only cyclists in Paris these days.

Recently Paris’s mayor Bertrand Delanoe introduced a new bicycle rental program, Velib (velo [bicycle] + liberte [liberty]), with over 10,000 bikes located at 750 stations around the city. The bikes rent (to local and tourists alike) for less than $1.50/day and can be returned to any docking station. This is all part of Paris’s effort to reduce car traffic and improve air quality in the city. Also noteworthy is that much of the financing of this venture is from Europe’s largest outdoor advertiser, JCDecaux who will control the billboards at the bike stations (seeing as it was the beautifully designed, “smart” advertising that I constantly saw during my time in Paris that inspired me to become a graphic designer, I have faith that this will remain classy). Another 10,000 bikes are set to join the force. More on Velib here. 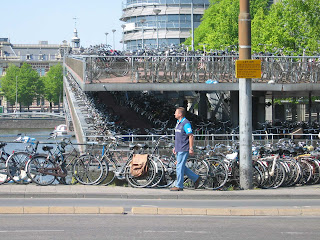 {in Amsterdam bikes are a way of life . . .bicycle parking lot by ASD}

This program has been test “driven” for the past two years in Lyon, France, but bicycles are no strangers to European cities. (Links via NYTimes).

America, are you listening?