It says a lot about a magazine that is well designed (and doesn’t look like every other magazine on the news-stand); it says even more when the advertisements inside are just as thoughtfully designed. Urbanite [local: Baltimore] and GOOD [national] are two such publications that stand out from the crowd. 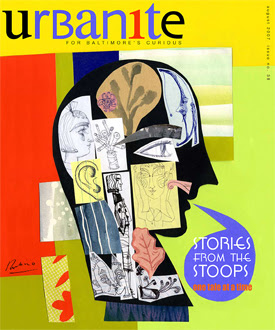 Urbanite is Baltimore’s free (it’s free and really well-designed, wow!) monthly publication focused on the issues affecting the relationship between the city and the people who live there. Every issue has a theme, features a different illustrator on the cover (the current cover is by Cornel Rubino), and has a “cork board” of worthwhile events (check out Original Alamo’s traveling outdoor cinema coming to Baltimore with a John Waters Marathon). While the magazine is aimed at Baltimoreans, anyone with a social conscious will appreciate this read. Here is a link to Urbanite’s staff The Baltimore Ten, top picks of things to do in Baltimore.

One of my favorite things the magazine cooked up was The Urbanite Project, where six unexpected collaborators were paired up, asked questions, and the results were published. My personal fav was “Renaming Baltimore” which paired Baltimore-based Pentagram designer, Abbott Miller with Bombay-born scientist-turned-fiction writer Lalita Noronha. Check out what they came up with here! 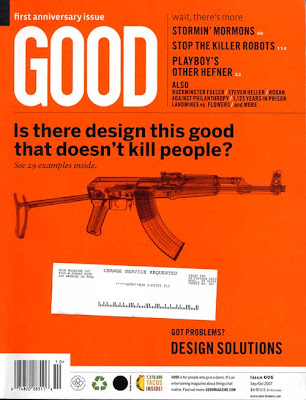 Yesterday I got the latest issue of GOOD (the first anniversary issue: 6) in the mail and could hardly put it down. I was especially drawn to this issue with its focus on “better-than-it-has-to-be-design.” Every issue is chocked full of striking illustrations and renderings of all kinds of issues, in a layout that easily communications multiple layers of information. The name, Good, gives away the fact that the magazine has a social spin, but the tag line really says it all: “media for people who give a damn.” The cool thing too is that when you subscribe (for $20), 100% of that goes to an organization of your choice (from the existing list). There was so much good stuff it this issue, it will have to wait for later posts…
Best of BaltimoreGee’s Bend