Everything I Ate: Cyprus

As far as I’m concerned, nothing says culture like the food people eat. My first morning in Cyprus (after I woke up from my flight that arrived at 3am…sans coffee, mind you), I was fed two meals within an hour! Yes, Christiana and her mother had a mission: to feed me every possible traditional Cypriot dish known to man. [Note: they are from the Greek side of Cyprus, so the food is more Greek than Turkish influenced]. Funny now, looking back at the pictures I am not only reminded of all the wonderful food I ate, but stories and conversations that took place during the meals. 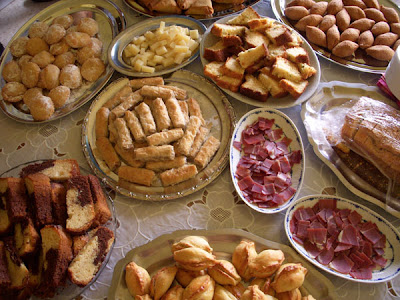 Table of Sweets: this table of goodies was calling my name during the Bride dressing (not that sauce!…sorry, that was a little Cypriot humor courtesy of Christiana). After a whirlwind of bridal ceremonies, and having come straight from hair and makeup appointments into an hour and a half storm of music, family and festivities, I was slightly overwhelmed to say the least. So I’ll just have you know that I had at least one of everything on the kitchen table (and several more treats were added after I took this picture). 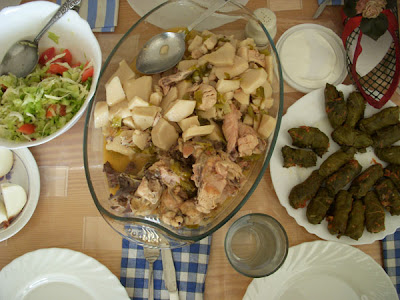 Kolokase! Christiana’s least favorite Cypriot dish, but her mother was determined to feed it to me. “Kolokase” became one of the few words that made it into my Greek vocabulary because of that fact. So the morning after the wedding, I woke up around 1 in the afternoon, and Christiana asks me if I’m ready to try kolokase. Sure! I say. So still in my tee-shirt and pajama bottoms I walk into the hallway only to find myself seated at the table in her godmother’s apartment the next door over. Little did I know the whole family would be there (at least 8 of us around the table, and another few in chairs in the living room). I sat there in a daze eating my kolokase and Greek yogurt (it was nice, although I’m still not exactly sure what it was — the kolokase is the potato-like part in the top half of the dish, along with the chicken). Everyone spoke Greek around me and I felt like part of the big fat Greek family.

Check out the entire set of “Everything I Ate: Cyprus” here!

Stay tuned tomorrow for a visit to the Hamam (Turkish baths) and perhaps even a very special “ode to wieners” to continue the trend of food. (You never know what you’re going to find when you travel…). Everything leads up to the Big Fat Greek Wedding…