My two favorite aspects of art are when artists collaborate and when art becomes accessible to everyone (and moves away from that snobbish stigma it sometimes gets stuck with).

{I do believe that’s a gnome I spot in their Sept 18th post!}

3191 Photoblog celebrates a year of mornings between friends Stephanie and Mav (of Port2Port press) who live 3191 miles apart. As part of their morning routine, they each shoot a picture which they post to the blog. It’s amazing to see how two friends can be so far apart, yet still be on the same wavelength. . . And speaking of collaboration, Mav recently teamed up with Camilla Engman (out of Sweden) for some lovely joint illustrations. 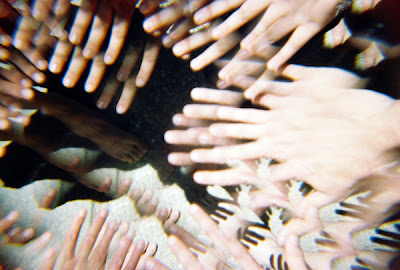 Then yesterday in the new issue GOOD, I came across this wonderful photo project called A Million Little Pictures spearheaded by Steve Peterman and Shane Zucker of Art House in Decatur, Georgia. Anyone, anywhere can request a disposable camera, shoot pictures for the theme for the current show (right now there’s a call out for “adventure”). Once the cameras are returned, the pictures are developed and then cover the walls of Art House. The next one is going to work a little differently, and if you sign up for a camera now ($16 and part goes to charity), you also get a vote for location where the next show takes places- the state with the most participants. . . Also worth checking out are The Sketchbook Project (a bit reminiscent of 1,000 Journals) and the Pen Pal Painting Exchange.

For those in Baltimore there’s Contemplate…Create! , 4 workshops where MICA collaborates with the Baltimore Museum of Art and the Walter’s Art Museum. Workshops start late October.