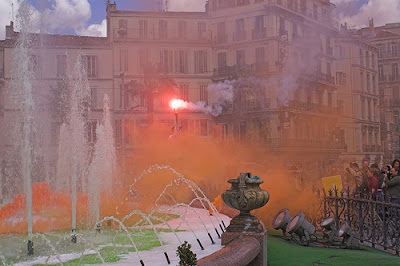 {peaceful protest in Marseille by Cudmore on flickr. Check out the entire set.}

Yesterday in the New York Times there was a great article about rap music in Marseille. Marseille is the second biggest city in France and has avoided much of the tension and riots surrounding immigrants in Paris and else where in France – the music, and sense of community (Marseille is more integrated than other cities in France where poor areas are pushed to the outskirts of the city), is a major factor why. It’s a fascinating look at the power of music and the positive influence it can have; rap music does not have to be synonymous with crude, nasty lyrics and violent messages . The music can in fact be very accessible, while still being extremely catchy, and making me dance in my chair at work all day. The people at the NYT were probably amazed by the number of hits the songs that accompanied the article got, when in fact it was me playing the same five songs over and over for six hours straight (not that I understand anymore of the French than the first listen).

The music took me back to my time in Paris when I would listen to NRJ or AdoFM (both which have live internet feed). The best souvenir I ever made were cassette tapes of French radio, with my favorite songs, and including commercials – every time I listen to them it takes me back to the time and place when I was living in Paris. My personal favorites: “Je Reste Ghetto” [“I Stay Ghetto”] by Tragedie and “La Belle et Le Bad Boy” [note: the visual accompanying this song is not the actual video] by MC Solaar. I particularly love too how many French rap songs jump back and forth between French and English. . . So what do you think? Like? or am I just a crazed Francophile? Any other recommendations for foreign rap????