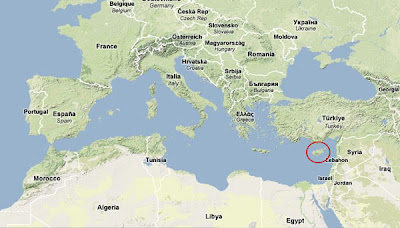 As I’m still recounting tales of my most recent trip, I realized no one really knows where I’m talking about when I say I went to Cyprus, so I decided it was high time for a little Geography 101 lesson. Cyprus is a small island in the Mediterranean that is geographically Middle Eastern/ North African. The island is divided into two separate zones: the North controlled by Turkish rule (marked by the giant flag on the side of the mountain), and the South is Greek Cypriot (that’s where I was, where people speak Greek and the food is delicious Greek fare). Despite the fact that a couple years ago the border between the two zones opened, there is still tension and division linked to a long history that will keep the two zones separate (my Cypriot friends have crossed into the Turkish zone once, but have no desire to go back).

I flew into Larnaca, stayed in the Capital city, Nicosia, and visited the castle and stone beaches of Limassol. It takes no more than two hours to get anywhere on the island, so the concept of a “road trip” doesn’t really exist here.