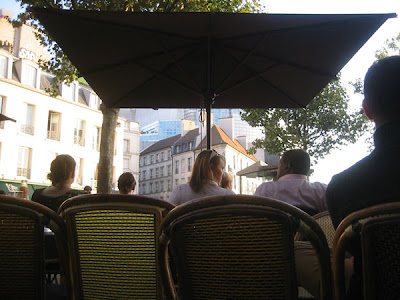 One of the most charming things about Paris (and much of Europe) are the cafes. Armed with chairs facing the street, cafes are not just about eating, drinking and socializing, but most importantly, people watching. Time just seems to slow down.

I remember hearing when I was a student in Paris five years ago of the looming invasion of Starbucks. First there was one, and then there were a handful. I couldn’t help but cringe by the fact that their arrival – from the Fast Food Nation – could single handedly have the potential to change one of the best things about French culture. Until Starbucks, a coffee in a to-go cup was pretty much unheard of in France. But what would this do to cafe culture? (luckily, I think cafe culture has lived on, but now they’ve banned smoking in cafes…but that’s a whole other topic).

And as if there weren’t already a Starbucks on every American street corner, one of the reports I heard on the Today show this fall, was that the chain (who does do wonderful things, give employee benefits and practices good design) was set to double their locations. Ugh! What about the little guys and mom & pop shops? That being said, and maybe it’s just me, but I was so glad to see this article in the New York Times yesterday about a local Kansas City joint outlasting the neighboring Starbucks (which is set to close). Haven’t corporations heard about too much of a good thing, and more doesn’t necessarily make things better?

One thing is for sure- Starbucks are the best free public restrooms around!