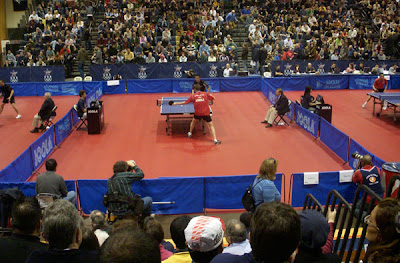 As a kid I aspired to go to the Olympics (I think it was more so I could get a really cool warm up suit), but now I’ve settled for going to the Olympics as a spectator. That has yet to happen, but on Sunday I got one step closer. While in Philly I attended the Olympic Trials for table tennis. A spontaneous idea, it was possibly the best $10 I’ve ever spent. Watching the players serve the ball looked a bit like Harry Potter conjuring up a magic spirit (or in another case, Mr. Burns’ creepy hands on The Simpsons), and them BAM the ball was off like a rubber band back and forth. Very impressive. There was some intense competition and the crowd was into it with roaring ooohs and aaahs at the end of each set. Unfortunately, despite the hype, 12 year old Ariel Hsing will not be representing the US in Beijing this summer (read more here). Other highlights included an old man in a suit not so covertly chugging beer out of a [clear] Poland Spring water bottle. Gotta love spectator sports – the crowd is just as exciting to watch!

Philly StyleArt of the Stamp