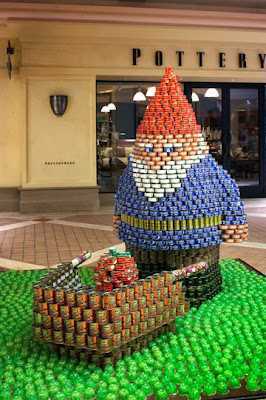 It says a lot about my coworkers that they know they can send me a picture of a gnome [made out of cans] and it will totally make my day. Last week I walked into my office to find a one-of-a-kind gnome constructed out of the Play-Doh (the second part of my Valentines I had handed out) that had magically appeared on my chair. And then Wednesday my day was made when the receptionist told me about a new animated feature called Gnomeo & Juliet (starring the voice of Kate Winslett) coming out this year. Seriously, what could be better than Shakespeare a la gnomes???

“Gnome More Hunger” (above) was constructed by DMJM out of LA for Canstruction, a design/build competition where ultimately the cans are donated to local food banks. Very impressive work, and for such a great cause. (Psst… the competition is coming to Baltimore in May).

Have a great weekend everyone!