Late Night at the Museum 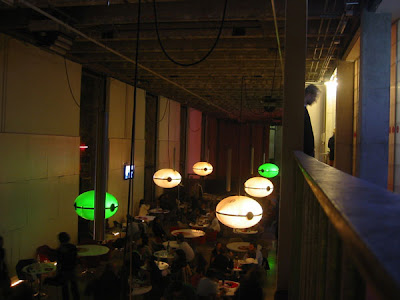 Ever since my last trip to Paris I’ve been obsessed with the idea of late night museums – all part being a yoco and my dream that the entire world takes part in Nuit Blanche, I suppose.

After all the time I spent in Paris, I don’t know how the Palais de Tokyo [contemporary art museum] managed to escape my path for so long. When you’re trying to cram your day full of sights (I’m not talking tourist stops…more like hip-hop classes) and shops (that are open from 11-5), it’s refreshing to have a museum like this (complete with bar and restaurant- pictured above) that’s open 12-midnight. It’s like a glorified gallery or art opening and only feels right to experience it this way. As far as I know it’s the only museum in Paris that does this (the Louvre is open until 10 on Wednesday + Friday and D’Orsay late on Thursdays- both a great way to avoid crowds and actually enjoy the art), but it definitely makes the art come alive.

After watching “Night at the Museum” the idea only further resonates – how fun is the last scene where there’s a giant dance party in the museum? (I mean it would be even cooler if the T-rex and Attila the Hun really came to life like they do in the film). While in New York at the New Museum, I loved that they have a series called “night school” with regular lectures and seminars to engage the public (and I’m sure it’s not anything like the memories of school you have). But museums activities don’t just have to be academic. Check out all the hot stuff that’s happening around NYC to get people out and about in “It’s Party Time in the Galleries” in this weekend’s New York Times. All really exciting and makes me want to move to the Big Apple, but with that rent… I think I’ll stick to Baltimore and just plan more weekend visits.