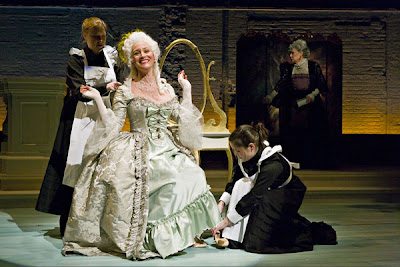 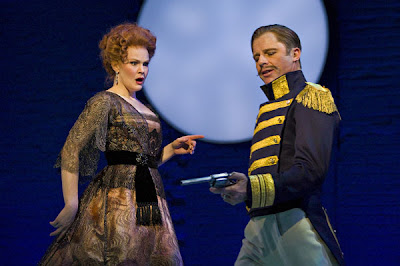 Maybe it’s just me, but watching Project Runway season 4 once wasn’t enough. Now I’ve probably see it at least three times through thanks to the never ending marathons on Bravo. And wherever I go I can’t help but drool over fashion now. Last night at CENTERSTAGE‘s production of A Little Night Music it was like watching a new collection come down the runway with each new scene. I’ve always been such a fan of the “behind the scenes” aspect of the theater – so I can’t even begin to fathom how the costume shop managed to create all these stunning garments (designed by Candice Donnelly) in such a short time. I was totally struck by the set too- with the exposed brick wall open to the back of the theater and painted electric blue (a new favorite color), and the lights which made it all come alive.

The show was delightful, fun and entertaining, although I must admit from time to time I got distracted staring at John Waters who happened to be in the audience (one of my Amélie moments where I love watching reactions of people in the crowd). After the show I somehow mustered up the courage to go meet him so I can now cross that off my things to do in Baltimore list. Check. But I’m still left pondering how in the world he keeps that mustache of his so thin and trim!

(photos by Richard Anderson via CENTERSTAGE)

The New Guide in TownSlumming It