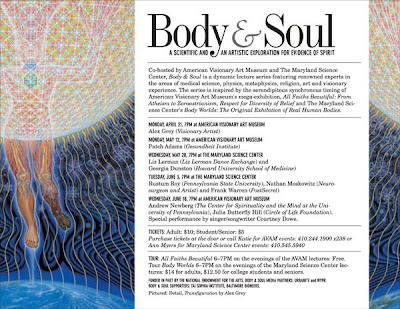 When I first saw the movie Patch Adams, I didn’t think anything of Robin Williams playing the character with the same name known for his clowning-meets-care approach to medicine, that is until I encountered* the real Patch Adams, who donned large funky clowning pants and long ponytail (with blue streak), brimming mustache and a dangling earring in one ear. The further I get into the depths of the issue of health care – and I am a lucky one who has health insurance – and the impersonalness of doctors, I can’t help but appreciate how he, along with the Gesundheit! Institute, are striving to revolutionize the health system with generosity and compassion. Sadly it sounds like such a novel concept in this day and age!

As part of Body & Soul: a scientific and artistic exploration for evidence of spirit, Patch Adams will be at the American Visionary Art Museum on May 12th at 7pm ($10 adults, $5 students/seniors). The series begins TONIGHT with visionary artist, Alex Grey (artwork on flyer). Click here or the image above for the complete line-up. 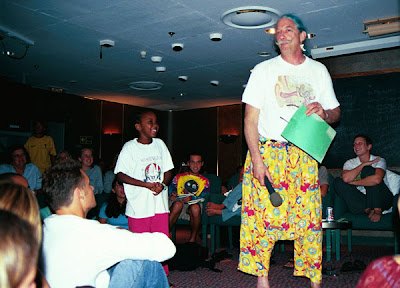 * He joined us for one leg on Semester at Sea (pictured above), sharing his mission and causing controversy for others with his bold political statements. Strangely enough I encountered him a second time in National airport, clearly back from a volunteer mission with several other “clowns” in tow.