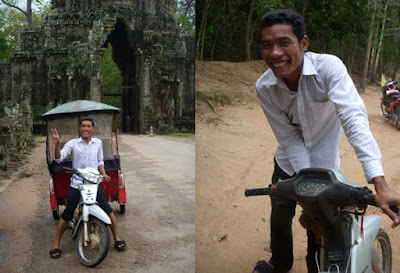 Meet Heang. He was our super tuk-tuk driver who transported us from temple to temple at Angkor Wat (they’re spread out over 30 square miles). He taught us the ropes, showed us around, protected us from rain and taught us all about Cambodia. And all for only $12 US for the day! This was hands down the best way to travel in Siem Reap and part of the adventure. (If you’re headed to Siem Reap, let me know and I’m happy to pass along his contact info). 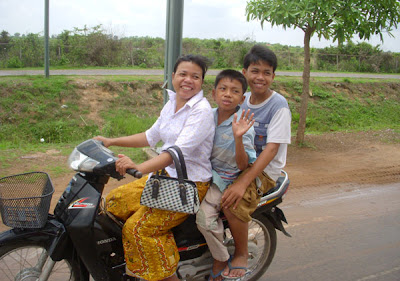 One thing is for sure, the concept of the “over-protective parent” doesn’t really exist in Cambodia. From families of 4 packed on a moto (no helmets, of course), to kids as young as 5 or 6 selling things (that’s a whole other post) life there doesn’t follow the same rules as it does stateside, but still life goes on. And in the States some schools have banned recess because too many kids were falling and getting hurt- what!?!?

Part of me really wanted to get on a moto just for the thrill of it, but part of me didn’t want to die either. The tuk-tuk was thrilling enough, as lines on streets seemed to be decorative more than anything else, as we regularly turned into head-on traffic. I only saw a couple stop signs while in Cambodia, but they clearly didn’t do much. As for crossing the street in Phnom Penh – it often took a good 5 minutes to even begin pondering how you were going to get across. 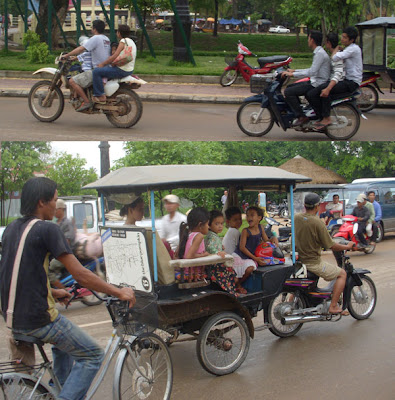 The bus between Siem Reap and Phnom Penh was a real treat. Not only did we see the countryside, but we experienced the thrill of transportation. A simple honk to pass (I think we were in the lane of traffic going the other direction more than the lane we were supposed to be in) and the only time the brakes went on were when a herd of cattle decided to wander into the road. Really, all you could do was laugh.