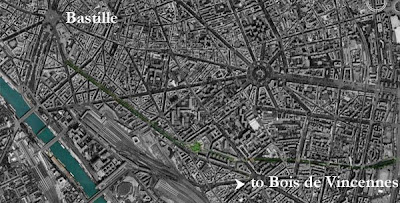 As a student in Paris I had a “rigorous” course load that included “Intro to the Louvre” (class in the Louvre every Wednesday night and we still didn’t see it all), Impressionism (visiting sites in the city), Photography (in a professional studio with the coolest photographer, Philippe Vermes) and French Gardens (visit at least one park or garden around the city every week…that is after tea and cookies in my professor’s apartment). Hence, my love affair with Paris began.

The gardens became a special part of my time in Paris. For the most part they were created as “green spaces” to get away without having to leave the city. And a good reminder to sit and slow down once and awhile. Each park and garden has a personality of it’s own so it never felt like I was going to the same old place. This article (and great map) on the “Hidden Gardens of Paris” from the New York Times will give you a good sense of what I’m talking about. And clearly I need to go back, asap, because there are still many that I missed! 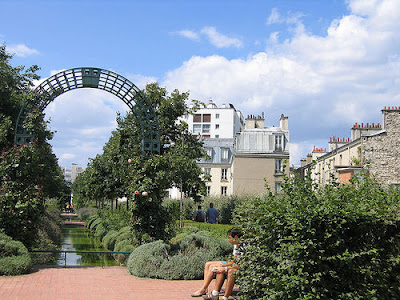 Of all the parks in Paris, Promenade Plantee is probably my favorite, namely because I spent the most time there – running along the top of the viaduct turned park along the Paris rooftops with my headphones blasting French rap. Sometimes I would spice it up and run back along the artist studios that fill the bottom arches below. It’s hard to picture, but I tried to map it out (in green…it’s narrow, so you may need to click to enlarge) with the help of a Google map above, and you can see one section of the narrow park in the photo by flickr user Cleita.

The most exciting thing is New York has plans to add their own version of Promenade Plantee, called “High Line.” It’s an old raised freight line that is being converted into a park. Check out their website or get the whole scoop (and most recent renderings) in this NYT feature.