After the inspiration from my grandfather’s photo album yesterday, I decided to break out my scrapbook from my semester abroad in Paris. I arrived in Paris just a couple days before September 11, 2001. 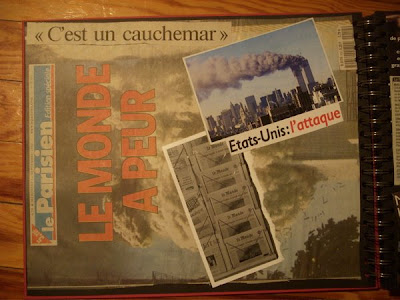 I heard the news of the event while stopped at light Place de la Concord (which in the days that followed became the location for the make-shift memorial) during one of my first runs in the city. An American gentleman stopped me and told me what happened (it was a given I was American – first of all the French don’t exercise, let alone along the Champs, and my English print tee was a sure giveaway that I wasn’t pulling off the French look yet). I continued my run, but felt numb by the news. I got back to the apartment, and my new roommate had already heard. The already surreal images became even more so as it was accompanied by French commentary. My French was so-so when I arrived, but I don’t remember being able to take in a word of what was said. 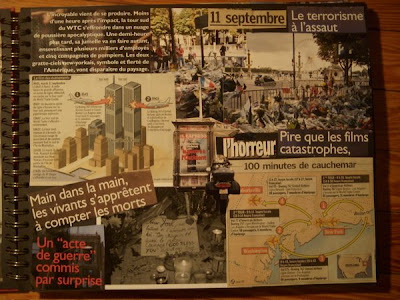 But I felt safe in France, and felt compassion from strangers. It was surreal at the time, but just as surreal to think it happened 7 years ago today. I like to think we’ve all grown stonger since then.