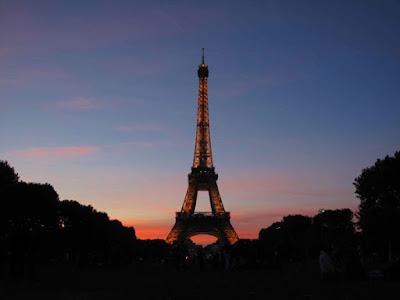 For the past few weeks I have this fear that my friends feel like they think I’m too good for them or don’t care about them. My average email response time of 5 minutes, now three weeks later, is still to be determined. The reality is that I’m just really busy, disconnected, and running in a lot of circles. Here’s a tale from yesterday of how fun life in Paris really can be.

The day started off with an awful head cold, feeling like I should stay in bed all day. Instead I opted for Option B – explore Paris and run errands. By the end of the day I felt like my head was going to explode from waiting in lines, but all that mattered was that I had pillows in one hand, and a cheap iron that the saleswoman convinced me would break in three months in the other (it’s ok, I don’t iron much anyway). On the way out of the metro on my way home, I saw the Orange [France Telecom] store open and decided just to humor myself I’d inquire for about the 20th time if there was any idea when the new shipments if iPhones was going to arrive. C’est arrivée! the salesman says, “we close in 15 minutes.” I think I looked sad, shocked and pathetic all at once, as I announce, please, let me run home and get my paperwork so I can get the phone I’ve been waiting for nearly a month now. Today. He obliges, and I seriously start running down the street, trying to look like one of those fabulous French women in the Dior perfume commercials, but miserably failing, as I have my large shopping bags in tow. But if there’s anything I learned how to do in Baltimore, it was to how run in heals (the buses are so infrequent, it became a necessity). So there I am, running 4 blocks and up my 5 flights of stairs to my apartment, in my dress and heals, forgetting instantly that I really do deep down feel like crap.

I throw down my jacket, grab my passport and any piece of paper that the system of French bureaucracy could ever ask for. I don’t even take the time to go to the bathroom, because there are more pressing matters at hand. I mean, what if the iPhone that I’ve so patiently waited for sells out by Monday? A mere 45 seconds later, I’m back out the door, running down the hall, but not before severely bending my key which is still in the lock. It’s a hopeless cause at this point, and I run back to the phone store, now with a lighter load, and striving harder to pull off the Dior-girl look, but really only caring about getting my phone. I’m forced wait at a crosswalk, at which point I have a moment with a homeless man, who helps reassure me the proper way to say “I broke my key” en francais. Even the man without a home has pity for my situation.

Bon. I arrive at the Orange store, and I think the man who told me to run was impressed by my speedy return. No, non, he was not closing early today. I knew exactly what I wanted and only got hung up on the fact that “unlimited” text messages between 8pm and 8am does not in fact mean “unlimited” text messages. So all is good, while they’re entering my information, I repeat the words that the homeless man echoed to me, J’ai cassé mon clé. Really all I needed to do was to hold up the key. We all agreed on three things 1) it’d be better to go to get a replacement than try to bend it back, for fear it’d break and 2) it was getting late and most places would be closed 3) I was screwed. So with my brand new iPhone in hand, I sprinted out the door to try to find a solution as how to actually get back into my apartment.

Of course the first place I went to – as suggested by one of the gentlemen at the phone store – was closed. But then again, it turns out it’s closed every Saturday. Then as I held up my key and spoke in my now nearly perfect French (as aided by the nasal congestion of my cold), I ask the woman to tell me where I can go for a new key. She looks up and happens to see a beautiful blue sign with a yellow key on it down the street. My savoir.

I’m tempted to take pictures, because the weather is beautiful, lighting perfect and cafes around me brimming with people, but, first I had to complete my mission: the key. I get to the shop, the door is open, but there’s a man with a cane in the doorway that tells me it’s closed. So in my cute dress and heals, I hold up my key, and in French say, I broke my key. And by the luck of god (or something like that), the shop owner, still inside the quaint shop that makes keys and fixes shoes and hasn’t changed in the past 50 years, has pity on me. Like magic he makes me a new key, and just as I pay my 5 Euros (I secretly wanted to pay him 50) he saved my life. At that moment, the tip of the old key broke in two.

So I headed home. But it was not without first encountering a “fairy princess” wearing a long white gown and holding her father’s hand as they walked down the street. She stopped at a storefront window just her height and tells her Papa to look at the bracelet. He responds, Oui, c’est magnifique. I had my phone, I had my key; the world seemed right again.

Until I got home and remembered I still don’t have internet (that’s a whole other story), and therefore could not activate my new phone. While I was thankful to actually be in my apartment again, I was still disconnected from the world. Rather than letting my body rest, I knew what I had to do: go to McDonald’s. As far as I’m concerned McDonald’s is one thing, and one thing only – the mecca of free internet.

Something about a trip to McDo just seems easy and straight forward. This was the one time I was wishing there was one closer to me, but I figured I’d settle and just walk to the closest one I knew of. It was still far enough away I considered Velib, until I remembered that my biking skills are still about that of a 3-year-old, and on my one bike adventure around the Champ de Mars I managed to sustain a minor shoulder injury (yes, I realize that takes mad skill to hurt one’s shoulder on a bike), so I opted to walk – still in my heals, of course.

Never before had the golden arches glowed like they did now. Until I got closer. The place that had been open just one week prior was now fermer pour travaux. After my day so far, I couldn’t say I was that surprised. It would have been really awesome at that point to pull out my iPhone to find a desirable McDo location for me to go to, but wait, I couldn’t use my iPhone because I was looking for internet to activate it.

Lucky for me, McDonald’s was kind enough to include a map of the two closest locations. So I hopped on the metro to the closest stop. I couldn’t help but notice that it was one of those metro stations that you literally went down only to go up again, and right to go left again. But the good news is I got there. I got to the McDonald’s – probably one of the nicest ones I’ve ever been to – didn’t bother to stand in line to purchase anything (it’s one happening spot in Paris on a Saturday night), sat down, connected to iTunes and activated my phone. And with the click of a button I was back in business. To give my thanks to McDonald’s I ultimately did wait in the long line of Parisian teeny-boppers and learned that fast-food in France is not only not fast, it’s not cheap either. Rather than scoffing at the 2,50 Euros I spent on a Sprite, I decided to walk away and appreciate how far I had come with my day. Besides, the Sprite did wonders for my headache and cold.

So that, my friends, is how I spend my days in Paris. If this is what getting a phone involves, I can barely contain my excitement for my carte de sejour….

[Now to get internet in my apartment, and Boarding Pass will be back in order!]