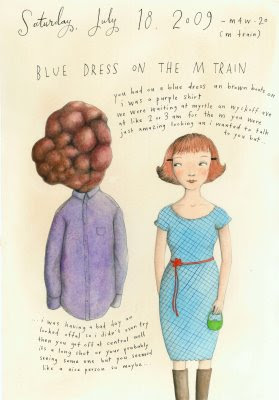 {Saturday, July 18, 2009 – m4w – 20 (m train) : you had on a blue dress an brown boots on i was a purple shirt we were waiting at myrtle an wyckoff ave at like 2 or 3 am for the m you were just amazing looking an i wanted to talk to you but i was having a bad day an looked offal so i didnt even try then you got off at central well its a long shot or your probably seeing some one but you seemed like a nice person so maybe}

If yesterday’s posts were all about connections, the theme of today is missed connections. It’s a subject matter that my friends and I seem to be falling victim to these days – passed junctures, missed communications, technical glitches, fleeting moments. They’re endearing, yet excruciating at the same time. And they’re the very moments – as documented on craigslist and in newspaper listings – that illustrator Sopie Blackall captures in one of her recent projects, “Missed Connections.” The video below exemplifies the spirit of the project (very well done for Radar!). Stay tuned for Sophie’s book in 2012 (and check out a “sneak peek” of her home right here).

All over France “missed connections” get their own attention on the website, Croisé dans le Métro, where metro commuters post their spottings, glances and desires in hopes that the person on the other side will be reading. There’s something extra charming about it in the city of love. And seriously, what’s more romantic than public transportation?? Read about it, complete with interview, on Invisible Paris. 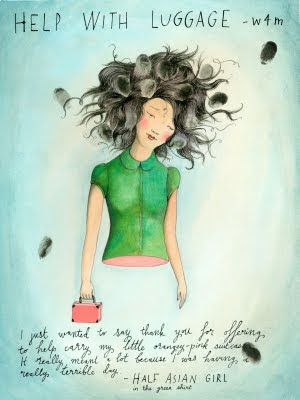 {Wednesday, September 23, 2009 – w4m – 23 (Hoboken, NJT station) I just wanted to say thank you for offering to help carry my little orangey/pink suitcase. It really meant a lot because I was having a really terrible day. -Half asian girl in the green shirt}