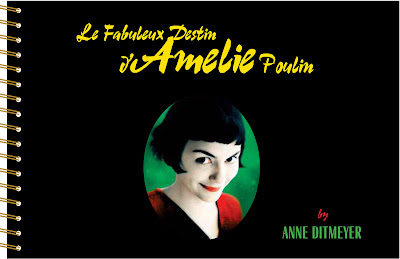 Le Fabuleux Destin de . . . my final project for my Color as Communications class. 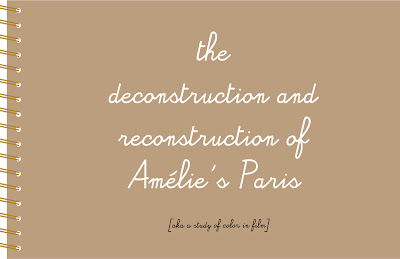 I’ll spare you the 10 page paper and 20-minute presentation on color in Le Fabuleux Destin de Amélie. The format is really designed more for a larger powerpoint style presentation, supplemented by verbal explanation, but you can click on the image to enlarge (and actually read the text). Essentially, this project was inspired by watching the Amélie Director’s Cut [disk 2] with interviews with director Jean-Pierre Jeunet and cinematographer, Bruno Delbonnel. Merging Jeunet’s ideas and mine, I created the notebook you see below using screenshots from the film and images (bordered in white) that I’ve shot over the past few weeks. 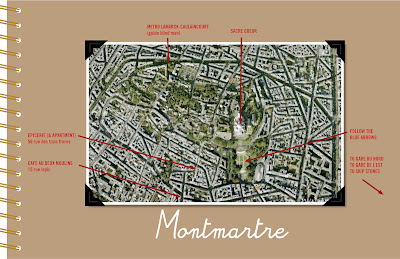 While color is everywhere in the film – costumes, sets, props, etc. – I chose to center on Paris itself. 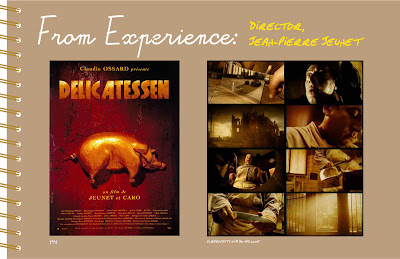 Jeunet was very disappointed in the way the colors turned out in the 1991 film, Delicatassen and sought to remedy that in Amélie. 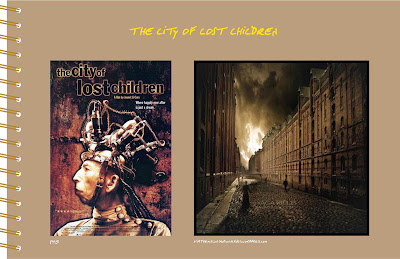 The film Jeunet created immediately before Amélie was the mega blockbuster, Alien: Ressurrection. Turned off by the idea of the global Hollywood film, he wanted to create a film as a contribution to French cinema. Amélie would become the first film he shot digitally. 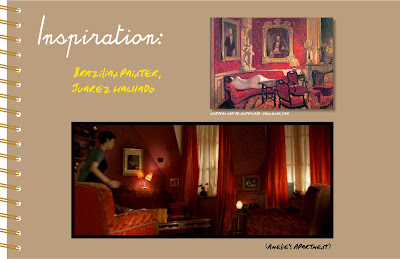 The paintings of Brazilian painter Jaurez Machado (who currently lives in Paris) are cited as inspiration for the color palette in Amélie. A lot of his work features two colors of prime importance – namely red and green – and a punch of a third lesser used color as an accent. 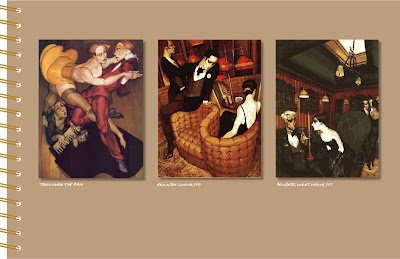 Amélie is a happy, positive story. The colors and telling should reflect that. 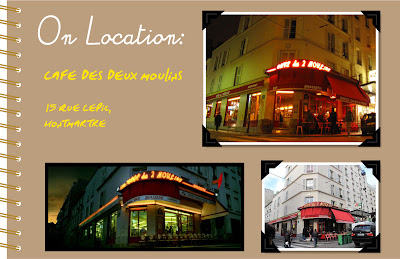 Amélie was the first (and probably last) film Jeunet shot on location, which provided immense challenges one typically doesn’t face on traditional sets – weather (20 days out of the month of May when they shot were rainy), people, traffic, the unexpected… 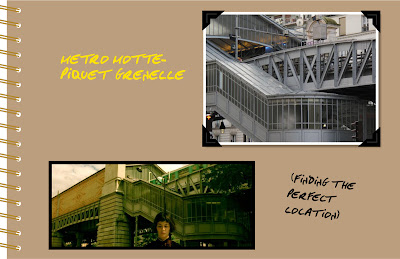 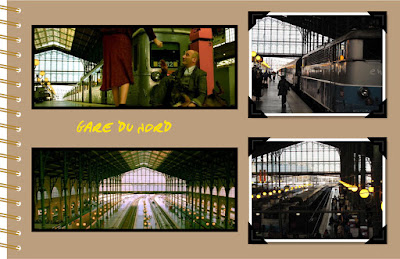 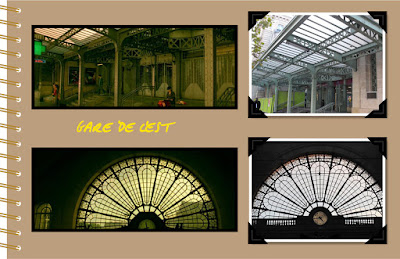 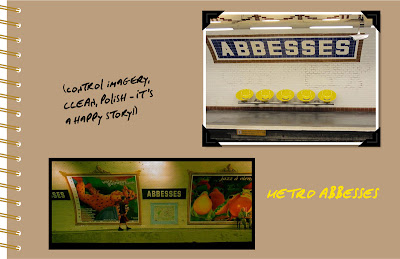 Jeunet is not so much interested in reality (it’s boring to him), but rather a heightened reality. He loves having control over every element of his films. 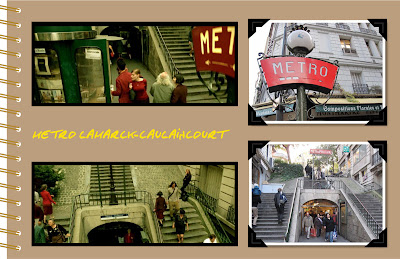 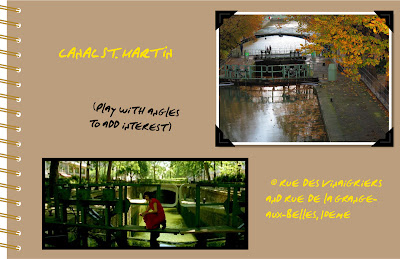 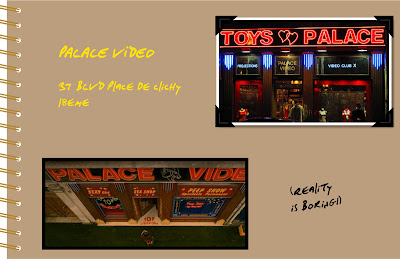 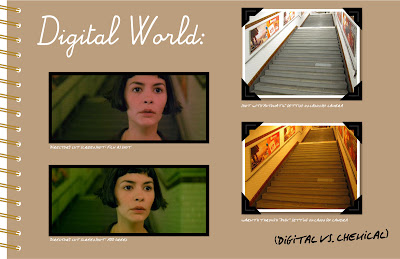 After the film was shot, they went in during post-production to adjust the hues and saturation to create the desired effect. 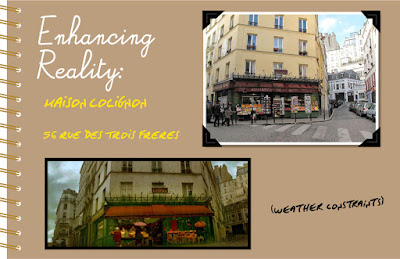 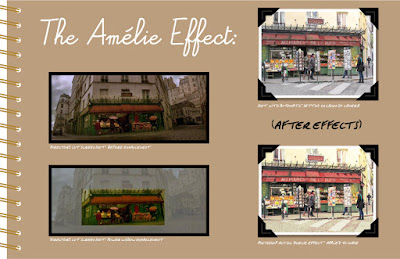 In certain scenes such as in front of the epicerie, a “power window” was used to pump up the color and saturation, such as one is able to do with Photoshop these days. In fact, one is even able to download a Photoshop “action” in order to replicate “the Amelie effect.” 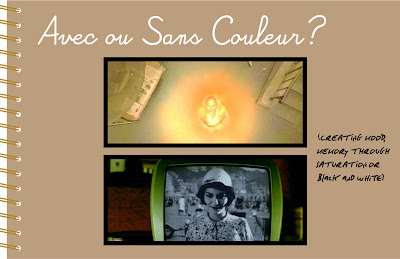 In other cases large saturation and the adjustment of levels creates almost super human effects. Conversely, the use of black and white imagery tells its own story and acts as a system for memory. 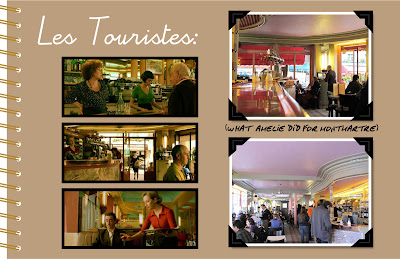 These days fans of the film still flock to the locations made famous by the film. It’s just a pity that the cafe not only decided to remove the famous tabac and wall where Amelie writes the plat du jour, but they’ve also recently decided to paint the ceiling a hideous purple color! (Oh, and don’t forget to visit the tourist shrine in the bathroom when you go!). 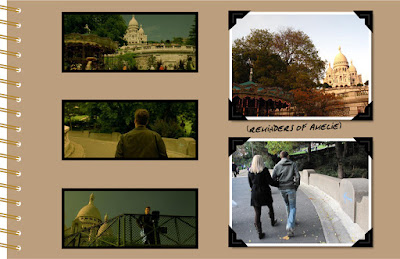 And in Montmarte, some clever chap has decided to mark blue arrows around to guide the average visitor up to Sacre Coeur. 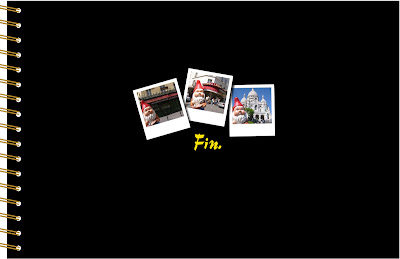 P.S. I offer an Amélie tour where I can help show you the key sites from Amélie in under three hours :)