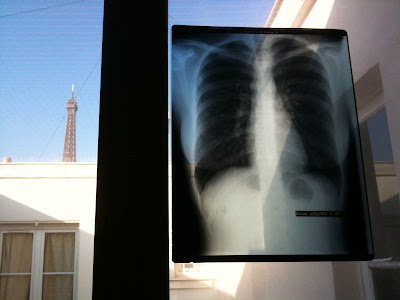 Today was a big day. After three months of waiting, I finally became legal in France, and I have the x-ray to prove it. Just another adventure in the joys of French bureaucracy. The process started back in August when I went to get my visa at the French consulate. No joke, that process was about ten times harder than actually getting into grad school. The “system” is completely dated and some simple signage would do them wonders, but no, we’re dealing with the French here, so that would be too easy. Really I’m convinced that the French are firm believers in “survival of the fittest” and this is how they’re able to weed out the duds.

My special “invitation” for my x-ray only occurred after loads of paper work, filling out even more forms and then figuring out how to prove I actually live here (my 10m2 apartment isn’t worthy of a mailbox!). It was good I was as “nervous” about taking my London trip as I was, seeing as I was given a whopping 3 working days notice for my appointment that I was scheduled for 9:30am this morning. Actually, conveniently for me, it was scheduled in the middle of one of my final “exams” so I got out of listening to about 15 presentations, and instead could laugh at the wacky world the French government was about to send me through.

I arrive 10 minutes before my appointment and hand over my form to the woman at the front desk and was told to go have a seat. Having a seat became the theme of the morning. As I sat there I couldn’t help but notice the poor choice in keylime green wall color, and can’t help but ponder why ever doctor’s office in the world strives to be the tackiest place on Earth. France, I thought you’d at least rise above American standards with your design sensibilities. Or maybe you just figured that you’d have a lot of Americans coming through your doors, and you wanted to make them feel more at home.

Then I was ushered into the next room, where I was told – you guessed it – to have a seat. The chairs here were metal chairs, kind of like some you’d see in the metro, except for the fact that much wider. Was this the French way of saying, we know you foreigners, you’re all fat!? Then when the doctor called me in to the first room, he takes my height (never mind the 2in heals), weight (clothed), and asks me if I’m pregnant! Non! Is he trying to suggest that I’ve eaten a few too many patisseries since arriving in this land? Then I realize that it’s because of the x-ray machine, and I’m sent back to… go have a seat.

The next room is a bit reminiscent of going to the county fair. I couldn’t help but feel a bit like livestock when I was practically pushes into the small changing room. The woman in French tells me to take of my clothes [top only] and wait there. I needed the English translation and she was annoyed with me suggesting “what don’t you get?”. Nope, I heard heard her right the first time. I was about to have my first peep show in Paris. And my door opened and it was me the x-ray machine, and the two [female] technicians. Deep breath in, and I was done, and ushered back into my stall to put my clothes back on. Step two, and I’m realizing this experience is not nearly as amusing for men as for woman. And, I go have a seat…

The final room is one-on-one with me, the doctor and x-ray. French doctors often get a bad wrap for being cold and distant (sure, blame it on the socialist system). And given that I’m at a center that sees a windmill of people everyday, I didn’t have high hopes for this step. But I had the loveliest doctor of all. When she got to the question “do you drink alcohol? ” I responded oui, with a smile. Du vin? she asks. Oui. I found it all quite endearing, and we were able to have another moment when we got to a similar question if I eat well and have a good appetite. Bien sur, j’habite en France! So not only did I get a clean bill of health, but I I did it all en Francais, and made it to the next, and final stop – but not without being told to have a seat two more times.

At the last stop, I pulled out my passport and handed it over to the woman behind the desk. As she pasted in my brand new “carte de sejour” inside she had me lick my 55 Euro stamp I was told to bring with me. After that entire escapade, I must admit that I was a bit disillusioned to be told to paste it on a piece of printer paper. Seriously, you make me pay 55 Euros (not to mention visa and consulate fees) and make me stick it onto a piece of paper? I really wish they would have a fake envelope or something just to make me feel better. But, at the end of the day, I’m just glad I have my proper paper work (and don’t have this last minute looming medical exam hanging over my head anymore)!

So if French bureaucracy is first meant to weed out the duds, the second role it plays is to bring foreigners together. This process is ridiculous, but something we all have to go through. At the center I ran into two classmates and we all had this strange since of accomplishment. It’s a weird process, but something we all bond over. And according to one of my professor’s the process has only gotten better over the years (shocking, I know!). In fact, he shared with us my favorite tale of French bureaucracy battles so far: Someone he knows was having trouble with their paper work and went to the office to try to get it settled. The people who work on the other side of the desk are notoriously mean and heartless. This guy just needed his paper work stay in Paris, and the woman at the desk wouldn’t have it – until she had a heart attack. Lucky for her, this guy was a doctor, and saved her life. Needless to say, he ended up getting his paper work. So things do work out. . . eventually.