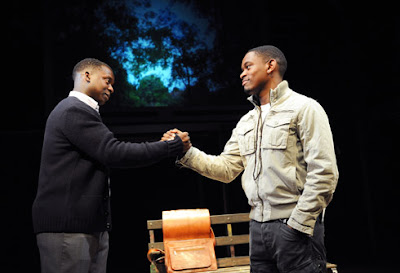 What do you do when you’re in the middle of finals, have a 20-page paper to write, another 20-pager to re-write, and a creperie design that needs finishing touches in the next week? Why you run off to London, of course. As soon as I learned that playwright, Kwame Kwei-Armah had a new show, Seize the Day, I knew that a trip to London was in the cards for me (even if the timing was less than ideal).

I first met Kwame 4 years ago while working at CENTERSTAGE in Baltimore, when he came over as the theatre introduced America to this talented playwright with his play, Elmina’s Kitchen (a play set in Britain, whose themes translated perfectly to the issues facing Baltimore). I can promise you that the play, and even more so, Kwame, touched everyone who worked at the theater that season. And while Kwame heads back to collaborate yet again with CENTERSTAGE this January, I’m stuck on the other side of the pond and knew I had to make this trip to “Seize the Day.” 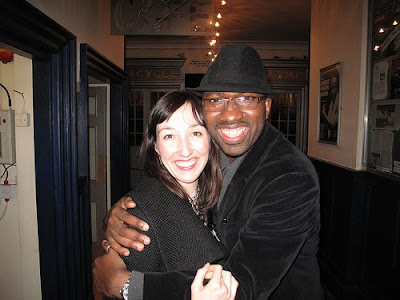 I have very high standards for Kwame after, Elmina’s, so I didn’t know if Seize the Day could live up to the standards he set for himself. The play – currently on through next week at the Tricycle Theatre as part of the 3-play series “Not Black and White” – begs the question if a charismatic former reality tv star can become Britain’s first black mayor. The dialogue is sharp and smart as each character calls out the others’ flaws – in a way your friends would – and it delivers, as it hits the audience with a good laugh at the same time. Kwame also has an amazing writing ability to see into the future and make whatever is happening in the here and now relevant to his play. Tiger Woods and this week even the British parliament make the play come alive and ring true. Uncertain about the minimal set, I was quickly persuaded otherwise. From the opening scene (which opened on screen), I thought the visual media projections worked incredibly well. Not only did the medium compliment the story, but it also provided an innovative and very contemporary and forward thinking approach to the media and play.

So needless to say, I loved the play. But there’s something I loved even more – the audience. Looking around it was an incredibly diverse house, full of a range of ages and backgrounds. The women in front of me and to my left helped bring every moment more alive for me with their laughs and connections with what was happening on stage. I was in the midst of an energy and engagement I had never experienced before and it was quite magical. It also helped that it’s a rather intimate theatre, but as far as I was concerned, I had the best seat in the house. I was in the back, center, and had the ability to see nearly every face and watch their reactions throughout the play (turns out it’s something Kwame does sometimes too – sneaks in during the last five minutes to watch people and their body language).

But I left the theatre wondering why this feeling and energy is something I’ve never quite experienced like this in the States? Is it just more of the culture in Britain to go to the theatre? (vs. going to the theater to feel cultured?). Was it just this play? this audience? this particular theatre? Regardless, I hope it’s something everyone can experience one day. Oh, and I hope you can meet Kwame too. He’ll change the way you see the world.

If you’re in London in the next week, pick up your ticket stat!