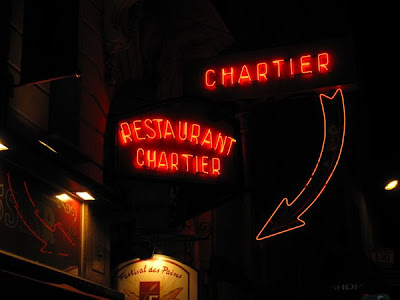 Friday night I had one of those surreal moments of life, which eerily is becoming the norm for me these days. I had two friends in town from Baltimore, so I thought it would be fun to take them to the typically French restaurant Bouillon Chartier. It’s really one of those places you go for the experience and people watching, but you can’t beat a 3-course meal with wine for about 20 Euros. 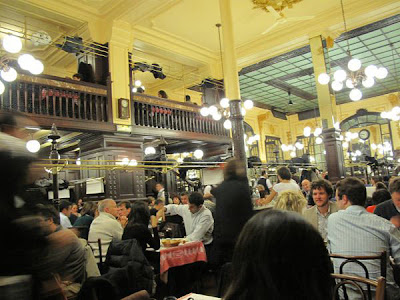 The resto is quite popular among French and tourists alike, so you can expect to wait in line. Once inside, no seat is spared, so be prepared to get cozy with strangers (only adding to the experience if you ask me). We actually got inside after not to long of a wait and were taken to a table not far from the door (fabulous for watching the maitre d’ in action all night!), along with the three girls behind us. It was quickly established we were Americans. So where are you from? Baltimore? Really – we used to go to school there. It was one thing to establish that I used to live a few blocks from their school, but it was a whole other moment when one girl claimed to recognize my friend Elizabeth. Oh, I just have a familiar face. But the girl insisted that she knew who she was – and she did! Not only was our new friend able to name the magazine that Elizabeth used to work for, but it turned out that Elizabeth had come into speak to one of her classes at one point. For anyone from Baltimore, you can really appreciate this as a truly “Smalltimore” moment. Small world stories happen all the time in Baltimore, but to transport a Smalltimore moment to Paris was just priceless!

P.S. Check out the homage to Baltimore – “Baltimore, the Greatest Show on Earth” – I wrote earlier this fall as a special feature on Ever the Nomad. While I adore Paris, Baltimore will always hold a special spot in my heart.

A Day in the LifeBoarding Pass – Leela Cyd