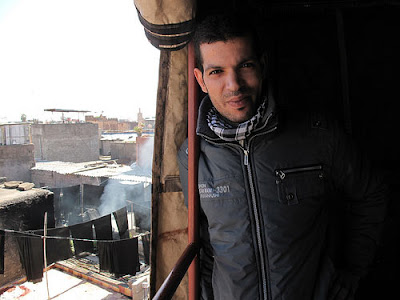 When my friend Sarah saw this picture on flickr, she left the comment, “Moroccan Idol?” which seems very fitting. One thing was for sure, Mohammed had rehearsed and his routine down pact. He was good. 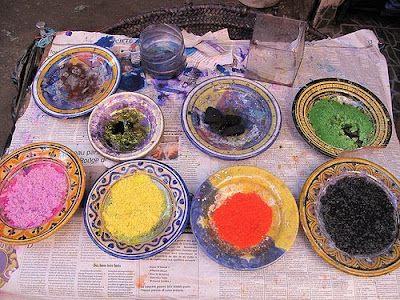 He persuasively lured me into his shop and was eager to teach me about the process of dying the yarn that turns into fabric. Meanwhile, I was excited to have an excuse to speak French. He invited me back to see the inner workings and the artisans at work (as the colorful yarn dried overhead). I got a really cool color demo, and he showed me the “magic colors” that change when wet. 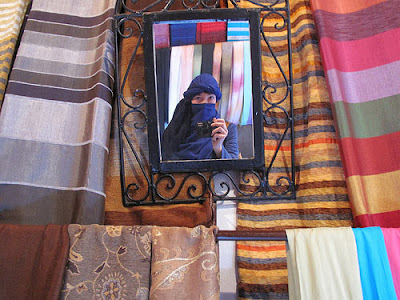 He then made me into a Berber, and told me to take a picture. 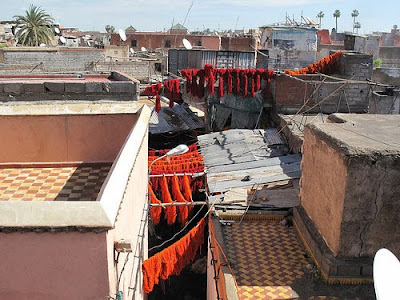 And then up to the rooftop deck of the shop across the way so I could take in the views of the medina (which space is tough to grasp when you’re lost in a maze). 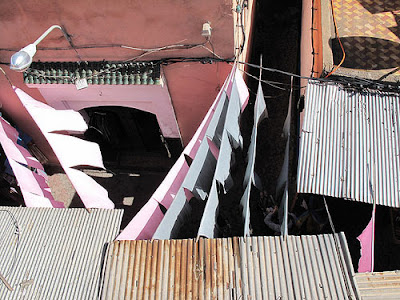 And I loved the patterns and textures. 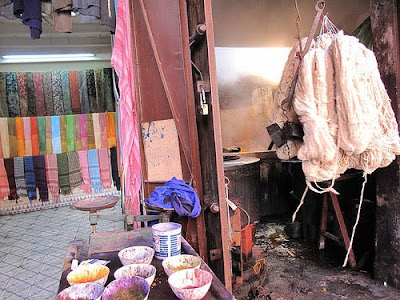 But it was my first day in the souks, so I wasn’t ready to buy (that ended up being a good story all day to avoid unwanted pressure). But I asked for his card, said I would return and thanked him for his time. I’m sure there’s a tendency for shop keepers to not believe tourists when they say they will be back. Heck, in defense of the tourists, it’s nearly impossible to find anyone/shop again. But I was determined to go back, and I did. Unfortunately, Mohammed was “on vacation” according to his “brother,” but lucky for me, there were plenty of gentlemen happy to help. We chatted a bit (they all loved that I was doing my business in French), and were making deals and specials (I had even brought a friend with me – which I pointed out was new business). I was shown all sorts of scarves. Apparently the beautiful two layer silk one was made it the shop just across the way (it was closed). Hmm, funny that I had bought that same scarf in Egypt 5 years ago, and saw it on my travels in South East Asia last year too. Clearly many of these “beautiful handmade scarves” were factory made, but I was willing to play the game and they were still cool. So finally I had picked my items. He tells me he’s going to give me a fair price for a necklace and a scarf. The answer I get 600Dh (that’s more than 60Euros). I walked out immediately, and he tried to get me back to get the sale. I looked at him and gave him the “are you serious eye?”. Clearly, I was being taken for a ride. I was willing to make some concessions for my good experiences a couple days earlier, but it was a pity to leave on this note. What was worse, was that he seemed so upset that I wasn’t buying into it. Perhaps he could learn a thing or two from Mohammed, and maybe too things aren’t everything they appear.

Morocco was one of those place where there were challenging moments, but in the end you have to trust yourself, do your research, and know what’s right. It made me realize the important role they play as hosts, and we play as guests in a country. Talking to someone who works in tourism there, she noted that Morocco is the one place in the world where every time you ask for directions people are eager to take you somewhere and demand money in return. (Can you imagine that happening in Paris? she notes). Still, whenever traveling you’re going to have a range of experiences, and you have to take from each what you can. We all have to do our part.