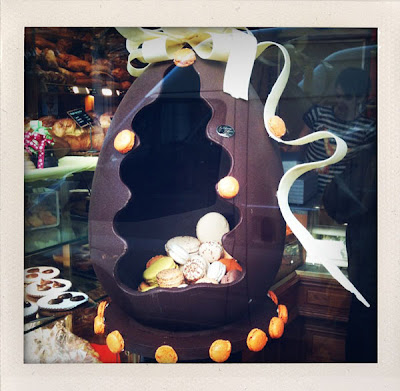 While Easter is still a week away, with the help of some amazing chocolate displays in the windows of my local boulangeries, I’ve been in the spirit for awhile now. The goose may not have laid a golden egg (yet), but she sure has laid some giant eggs, engraved eggs, and macaron filled ones too! I can’t help but feel like a kid again on a giant Easter egg hunt that spans my neighborhood, and the entire city. Luckily as an adult I’ve exhibited a bit of self-restraint and have listened to what any mother would say: “Look, don’t touch.” Instead my Easter Egg hunt has turned into a little game of photos I collect on my iPhone. I also find you save a lot of calories that way.

While Easter is the perfect season for “city hunting,” really it’s a game I like to play all year round. Ever since the first time I moved to Paris, I’ve always noticed that there are often themes to my day – anything from “there’s dog crap on every block day,” to “motorcycles on the sidewalk run me over day” to “wow, that Easter egg is bigger than the last one day.” While not always glamorous, I find that stating the obvious and mundane can be one of the most exciting ways to explore a neighborhood. And while stating the obvious, it’s fun to document it too.

Despite my love affair with the movie Amelie, I was never a huge gnome fan until my aunt and cousin came to visit me in Paris. I had never seen a gnome in this city until they came and pointed them out to me. The next thing I knew was that they were everywhere and we were all capturing the proof on our cameras. To this day our game continues back and forth. But I must thank my aunt and cousin for helping me open my eyes to something that was around me, but I never would have seen without their help. (As proud owners of a Westie dog, they also managed to “capture” several during their visit. Funny, I had never seen one in the city until they came along either).

I was recently at a lecture where the speaker made the point that we learn more about New York by going to Turkey. Sometimes we take for granted what is around us until we experience something that makes us look at a place with new eyes. In my case, I didn’t have to go anywhere – rather, I had others come to me. In the same respect, in my adventures in “mundane hunting” I’ve enjoyed teaching the French a thing or two about their own culture. It goes both ways.

For the next week, I invite you to go on your own “Easter Egg hunt” in your neighborhood and see if you see anything different, and as always, I welcome you to share in the comments section.

(This post has been entered into the Grantourismo–HomeAway travel writing competition.)