Life Lessons : How to take a taxi 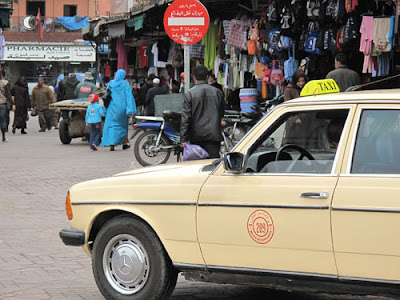 Sometimes the greatest sense of accomplishment can come from the simplest tasks. As a clear foreigner no one knows how to take you for a ride – literally – than a taxi driver. So for me it’s a little game now, and in a place like Marrakesh it was 100% game on.

When I first arrived at the airport my flight was late, dark and rainy outside. Sure I’d done my research on the place, but sometimes it’s easy to overlook the little things like how much a taxi ride into the city costs. I quickly consulted my book, and although it was a few years old, 50Dh was what was cited. So the 200Dh (approx 12Dh = 1 Euro) the driver quoted me when I asked the price wasn’t going to cut it. But then I looked over and saw the sign for the bus stop. Ahh, my beloved public transportation. My book was dated enough that at the time there was no bus in service from the airport. But there were people in line, so I did what seemed natural – I went up and asked them. We were all new here and a bit overwhelmed, and the aggressive taxi drivers kept approaching us. But in the end, our little secret was right and we bonded over it. The bus was a mere 20Dh and the driver was incredibly helpful and pointed us all in the right direction.

While I’ll opt for walking or public transportation over a taxi any day, sometimes the reality is that you need to know where you’re going. On my first full day in Morocco I visited the beautiful [Yves Saint Laurent] Jardins Majorelle. Before I left the hostel I was sure to ask the front desk what an appropriate rate was to get there [20Dh max] (this proved to be a great tactic for buying anything in Morocco). However, after a visit to the gardens and lovely lunch in the cafe and I decided to take a detour to the tanneries to see how animal hide is made into leather. I should have known it was a bad idea when the taxi driver was extremely aggressive. It made me not want to believe him, he not the ideal host and me not the ideal customer. I ended up going with him on the 60Dh ride, but because I had not asked about what to expect from the tanneries, it just made for a less than ideal experience. In the end he was an honest driver, but I fault us both for the way this interaction happened.

So the next day when I went out to visit Jnane Tamsna in the Palmerie, I opted to self-select my own driver. I intentionally went up to the lowly driver lounging in the shade. Yes, he had no hidden agenda and we had a lovely conversation en route. On my way back I ended up getting an even better deal. Where I caught my taxi was in the hustle and bustle of normal Moroccan life, and hence there wasn’t even a second thought about upping the rate for a tourist. Lesson: get away from the other tourists if you want the best rates.

My final taxi ride was the most rewarding of all. It was late and I was coming home from visiting a friend. Although I found it a bit rude and disrespectful, the nature of my experiences made me ask price first. The first guy was completely over-charging, so I sent him on his way. Then I realized, in French culture one always must greet a person before doing business; turns out a simple Bonjour is true for Morocco as well. So when I hailed the next cab I said bonsoir, and asked him him how much back to Jema el Fna. He then threw the question back at me. The game was on. I didn’t accept his first response. Finally we got it down to 20Dh – a very appropriate rate. As soon as I got in the car he made a comment about not understanding why foreigners are always like that. I explained – in French – that I hate being taken advantage of just because I’m not from here. Little by little we warmed up to each other. He was impressed that I was here alone. And then when he found out I was American he loved that. He told me he was Berber and that Berbers love Americans – and Disney. It was a really fun ride and when I got to the final destination he told me the real price was 10Dh. But in this case I was happy to give him the 20. It was also a good reminder that a little conversation and friendliness can go a long way.

While every little interaction was a lesson in itself in Morocco, it wasn’t until I got back to Paris that I realized how much I had learned. My flight was delayed and I didn’t get in until after midnight. The metro had long stopped running, and even the airport shuttle I had pre-ordered was forced to leave without me. I was none too thrilled about the prospect of dumping 50-60 Euros on a taxi home (I have better things to spend my money on!). But then I put my thinking cap on and put the skills I had learned in Morocco to work. I may have taken a step to far when I asked the taxi driver if he was a “vrai taxi.” Luckily he seemed amused by me. There were 2 Frenchmen who obviously had been backpacking and the taxi ride was also not in their budget. So we decide splitting a cab could be an option. Then the driver says, 40Euro for me and 40 for the two of them – that I say ends up being far more than a single ride into the city! I was on a mission. Then I found another French woman who was game to share. The final price – 20 Euros into the city (20E for the girl and 30E for the two boys)! That’s pretty unheard of for a cab, and 10 Euros less than my shuttle would have been. The ride was silent at first, but then later we got talking. It turns out that our driver was part Moroccan. I would say it was a good experience had by all! And it made me think back to my trip to Cameroon where taxi drivers would only go when they’re full. Perhaps in this economy (and just to be efficient) we have a thing or two we can learn from the developing world. I mean, would I be writing a post the length of a novel on a typical taxi ride??