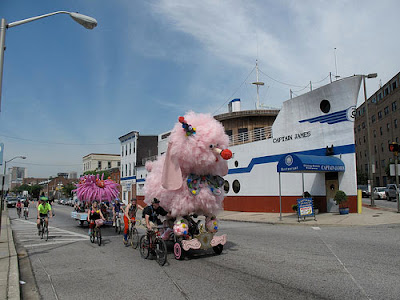 If I were to give any city a prize for mediocrity, it would be Baltimore. While many would take this as an insult, I see it as the highest compliment. As a bit of the bastard stepchild of DC and New York, Baltimore doesn’t try to be what it is not, but rather excels at what it is. As unlikely a team it would seem, Baltimore is John Waters meets The Wire, and no event better exemplifies this than the Baltimore Kinetic Sculpture Race. While the city can’t claim stake to the invention of the race – that goes to Ferndale, California – it embraces the race like no other city. And the winner of the race? The one that finished dead in the middle. Yes, the winner is the most mediocre. 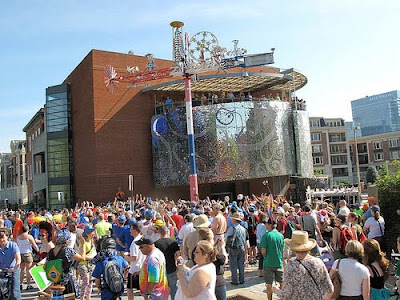 Not everyone can pull of a race of this caliber, but the American Visionary Art Museum does it with flying colors. [Top photo: Fifi en route to the water entry]. 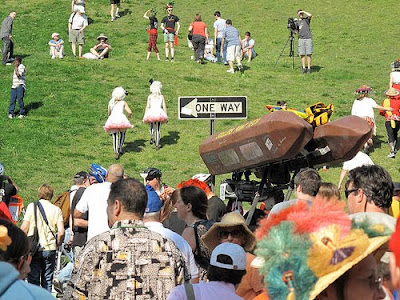 This year 29 man-powered sculptured vehicles show up at the museum (at the base of Federal Hill next to the Harbor), which happens the first Saturday in May each year. The 15-mile course is a tour de city, with obstacles in the water, through the sand, in the mud and of course navigating the Baltimore pot holes. 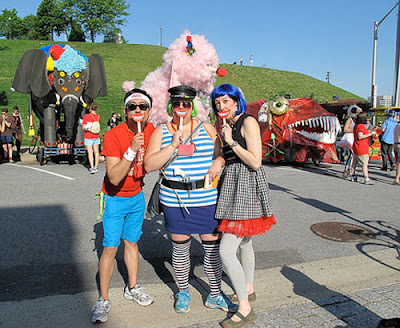 For the third year in a row I (in the blue hair) have volunteered for the race as a Kinetic Kop. My job? To keep the peace, write tickets for violations (which include always having a sock creature on board), and accepting bribes. It’s a tough job, but somebody’s got to do it. The past two years I’ve taken on the role of Kinetic Deputy, riding in high style in a beach surrey. But this year – thanks to my impromptu, spontaneous visit that no one knew about – meant that was on a bicycle. Confession: I’m a horrible biker, and never biked as a kid. Yesterday was maybe my 10th time ever on a bike. I figured there is no better way to master riding a bike than going 15 miles in one day. And despite despising Baltimore potholes, I feel incredibly empowered after completing it all. 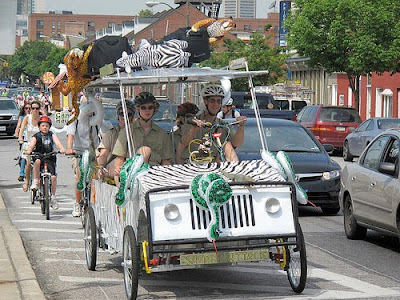 Because the race is spread out during the city, one can only imagine what passers-by are thinking. Safari Attack stuck in traffic pictured above. 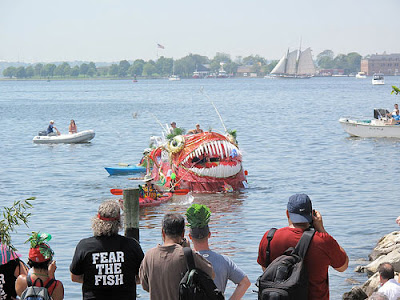 Then in Canton crowds like the shore to catch the water entry as each vehicle rounds the pier as the first major challenge of the race. Fear Chessie. 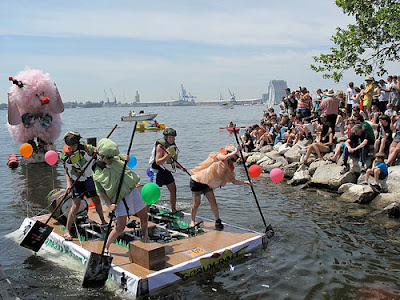 Scrum Roll Racer was a favorite of mine in the water as they whipped out their soy sauce paddles to make their way through the water. Fifi follows. It’s really the creative touches rather than winning that this race is all about. 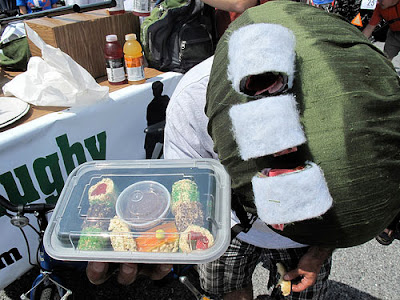 Of key importance to my job was giving citations, and accepting bribes. In Canton I was disappointed to see the Scrum Roll Racer’s sushi dressed racers eating pizza – rather than sushi – for lunch. I started to write them a ticket, when the most perfect bribe came my way. I was able to brush aside any violation after receiving this amazing box of sushi themed candy treats made out of rice krispy treats and gummy fish. 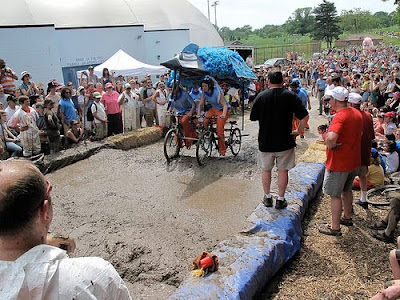 After all vehicles clear the water, it’s then up to Patterson Park for the sand and mud challenges. 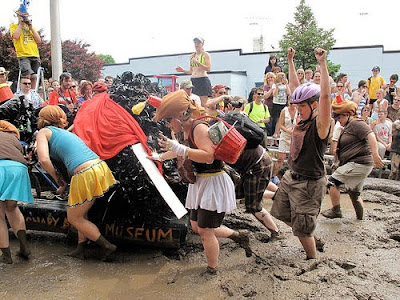 While all in good fun, the day is not without its challenges. 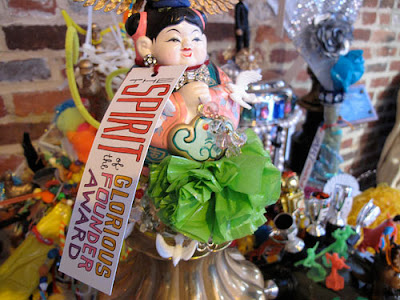 The race continues back downtown, around the harbor. Then, once you think that you’re back at the museum, there’s one more final, painful, loop towards the Domino Sugar plant. But it’s all worth it when you make it to the finish line. Everyone is a winner of some sort, and it’s the only race where you’ll win beautiful handmade trophies made out of “random fun.” And that’s when we all realize that being mediocre isn’t always so bad.

p.s. stay tuned for a *BOARDING PASS* on Tuesday!