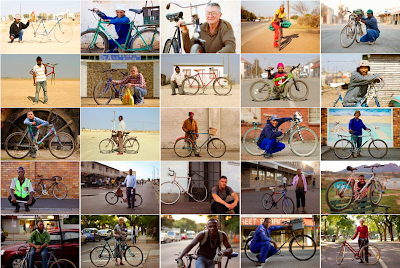 There are millions of great ideas floating out in the world which are limited not only by hours in the day, but more often by finances. Kickstarter is a site that hopes to break down some of those barriers and encourages creative endeavors by providing a platform where anyone can upload a project and share their stories which unfold through videos, pictures and blogs in order to entice you to donate to their cause. Any individual is welcome to make a pledge to a project, but projects only receive the money if the entire goal is met within a given time frame. This not only means less risk for everyone involved, but acts as a great testing ground, a way to get others involved, and motivates the project to come to life in creative ways.


In honor of my friends Lauren and Kyle who just got married (I introduced them!), major bike lovers who are currently on their honeymoon in South Africa, I thought the Bicycle Portraits Book would be a highly appropriate project to share. Pledges for this project reaped rewards for ($) contributors, and allowed the two creators – Stan Engelbrecht and Nic Grobler – to go on a bicycle journey across South Africa to meet and document everyday South Africans and fellow cyclists to understand the cycling culture (and lack of cycle commuters) for a photographic book. After two successful Kickstarter campaigns, Bicycle Portraits are no longer accepting pledges through the site, however project updates are posted and they are planning on launching a third campaign in early 2011. You can see more of their bicycle portraits here.

P.S. For another great/successful Kickstarter project, check out The Understanding Campaign – which seeks to teach everyone one word in Arabic, Fhm, “understanding” in order to help break taboos and bridge communication with the Arab world – that my friends at Posttypography became involved with.

P.S.S. For more great stuff on South Africa, check out what Lara and Terence are up to on their Grantourismo! adventures, including a beautiful time-lapse video of clouds over Table Mountain.