The Amazing Race Con’t {Getting Home} 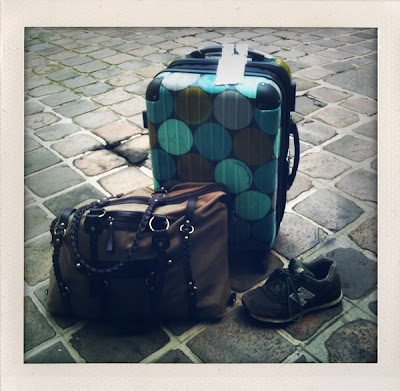 I love flying. It’s a time when I can disconnect and I know I’m getting somewhere new (and usually exciting) fast. And after my adventures hopping over the pond the first time, I somewhat expected smooth sailing this time. Little did I know I’d be doing another marathon sprint down the halls of Dulles airport (which was somehow way more painful than my sprint in the Frankfurt airport, leading to believe the 6 floor walk-up that I call home keeps me in better shape that I realized), and once again, winning the prize of last passenger on board.

I’ve always been fascinated by airports and they way they move people. In my recent travels, Dulles and Chicago O’Hare are prime examples of how not to move people. Although, all the blame cannot go to Dulles on this one, as I highly enjoyed the design of their new security area (although, it’s highly misleading when you think you’re in the home stretch, only to go down to the escalators to the next maze).

Really, the true blame goes to the United international ticket counter. If I were a true Frenchwoman (and not just a wannabe), I would have cut to the front. Instead I wove my way through a very long and boring labyrinth. It would have been exciting when I got to the computer at the front, except for the fact that when I checked myself in I got an error message. I immediately got the attention of the person behind the counter, who immediately said it was the responsibility of the person behind me. I raised my hand like a grade school girl and got the woman’s attention. Meanwhile, the error disappeared, so we had to go through the same process together, only to have her send me to the line of “misfits.” I had an idea why my ticket was flagged – they thought I was on a one way ticket.

But the others in line beside me were more mysterious cases – and we had plenty of time to discuss it as we were in said line for a good 45 minutes (although, admittedly, I didn’t have a watch, but the guy in front of me started to hint at the fact that I may not catch my flight – and that was over an hour before it was set to depart). I wish I had a picture of the poor woman in the pink sweater whose trolley full of luggage rested in one place for what felt like ages as she sat on the baggage platform looking completely and utterly defeated. I could hardly imagine what in the world could take that long (and I didn’t bother to check if she was still there when I got through), nor why someone else couldn’t be helped in the meantime.

I, on the other hand was a different case. Not only did the airline think I had a one-way ticket, but they saw an issue with my paperwork to get back into France (I’ll leave it at that, but at least I had an form possible to make up for slow French bureaucracy). It went to the supervisor level, who by some miracle gave me a ticket.

Security was long, but smooth sailing. The only casualty was the 6oz bottle of brand new lotion that didn’t make the standards – that I stupidly didn’t put in my suitcase that I decided to check at the last minute – but to get through the line was all I needed. I just hope some TSA worker has a really moisturized face that protects them from the sun.

Then I turned the corner only to see that I now had to hop on a tram to terminal C. This is the part of the adventure when I start speaking out loud without realizing it, and people give me funny looks. So some guy responds that we just missed the train. I see that the doors are still open so I make a mad dash for it. Clearly a few others follow, as one actually got stuck in the closing doors for a second, but not my problem.

Then I’m off and running. I see the man who I bonded with in line, who thought I could miss my flight. I run past him and say “I’m still in the race.” No one else was running but me. And suddenly I wished I had run more during this trip. Once on the people movers I slowed to a power walk to catch my breath (also noting that it would be really nice if you could take water through security in this case). It was a long hall though, and a long hike up the escalators. And when I got to my gate there was another woman before me, and I hear them say “last two.” It turned out the ticket I had was more of a “ha, if you actually get to the gate in time, we’ll give you a real ticket” ticket, but at least they issued me one. I was kind of pissed when I got to my seat – center section, but on the aisle. But then magically the two seats next to me stayed free in my Economy Plus seat with actual leg room. I like to think this was my mini-prize to tide me over to so I would stop thinking about if a) I’d actually get through customs and b) if my [polka dot] suitcase actually made it on the flight.

The good news is that a) France did let me back into the country without the blink of an eye and b) my pretty polka dot suitcase may have been the last one board, but it was the first one off.I guess if this is what the future of travel looks like, I need to start cross-training. In the meantime, I like to entertain myself by thinking it was another Amazing Race winning performance.

How We Travel {for People}Paris vs. NYC