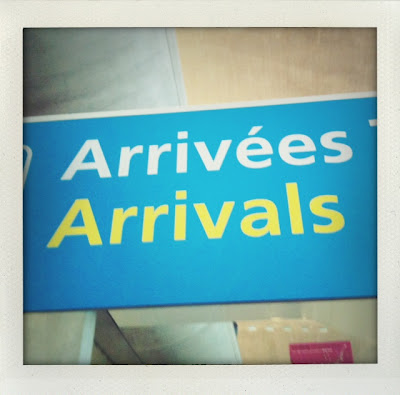 I know I’m celebrating the wrong season, but today I am thankful for the arrival of my friend Angie in Paris, for her first time off American soil (err, not including the unexpected layover she had in Madrid that lengthened her trip by a day and a half). 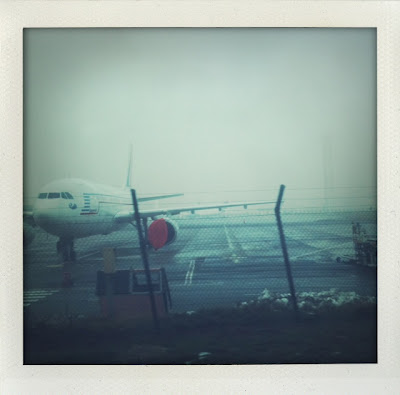 I left my apartment this morning thinking to myself, wow, what a wonderful day to fly, that is until we went through some tunnel in the suburbs of Paris an emerged in a deep fog. This was particularly strange because it’s never foggy in Paris. (There’s a scene in the director’s cut of Amelie, where Jean Pierre-Jeunet mentions this and said he created fog after the fact as an effect). As my RoissyBus pulled up to Terminal 1, I could hardly see the airport control tower (on the right side of the image above). Not a good sign, I thought to myself. At least I had a good book, and my iPhone said the flight was still on time. 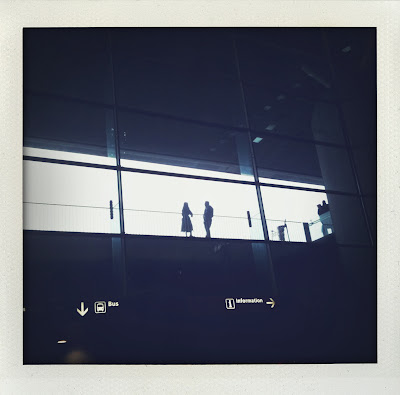 And much to my amazement, her plane landed. Yet, Angie wouldn’t land in front of me for another hour. The poor girl after hours and days of exhausting travel and jetlag was forced to interact with a new species – The French. I’m not sure exactly what all happened behind those doors, but she was truly defeated when I first saw her. France 1 – Angie 0. However, I think it was slightly redeeming, when I went up to the first airport employee that I saw and asked him if he could direct me to Terminal 1. His response, I don’t speak English (in English), and I responded, but I just asked you the question in French (en Francais). Yes, lesson one: lower all expectations, and have a sense of humor. 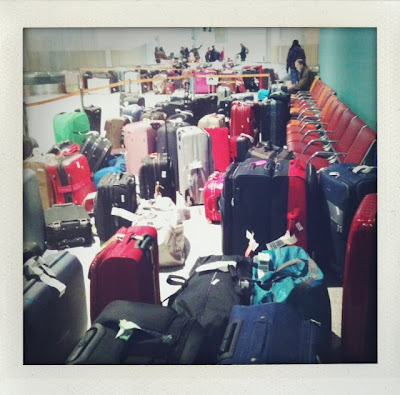 Once in Terminal 1 things were calmer. It felt more like a graveyard for suitcases than a lively airport. A series of questions to various people started to feel like a wild goose chase (and if you’ve ever been in T1, organization isn’t really it’s specialty). But once at the information desk, I asked the man behind the counter where we could reclaim my friend’s baggage that arrived yesterday on the flight she never made on an airline she didn’t fly on. He pointed behind us, and said, go through that door and go to the counter – they only work in the mornings, but give it a try. But it’s unauthorized access – “violators will be punished” – I responded. He shrugged his shoulders like, so [what]…? 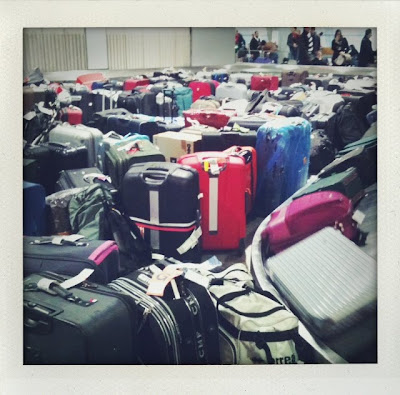 As so we took the man’s advice, walked through the no-access doors (of course we had to wait for someone to come out to go through ourselves) and found our first obstacle – a group of four “douane” [customs] officials in uniform. This was it, we’re not only getting kicked out of the airport, we’re getting kicked out of France. But I kept my composure and told them we’re here looking for a lost bag. And the response I get? A smile and a welcoming gesture! Who ever would have imagined? At this point we were giddy. That was Awesome, we agreed – you see, Angie, dealing with the French is a constant game.

And this is where we saw first hand the luggage graveyard, without anyone to tend to it. We were mildly excited for the prospect of actually finding the bag, but getting this far felt damn good. Then, using our detective skills, we pieced together snippets from our 5 prior questionings that seemed quite unhelpful at the time, and found the very counter we needed. It took all of 10 seconds for both of us to spot the bag, and immediately start jumping up and down. We WON!!!! And as redeeming as it was to find the bag, it was also fun to help make the day of the poor worker behind the desk who found us highly entertaining. Luckily too, this boost of adrenaline kept us going for what turned into an hour and a half bus ride home – but at least we made new friends there too.

Tomorrow is a new day.

Day 2: Being a TouristAll I Want for Christmas…