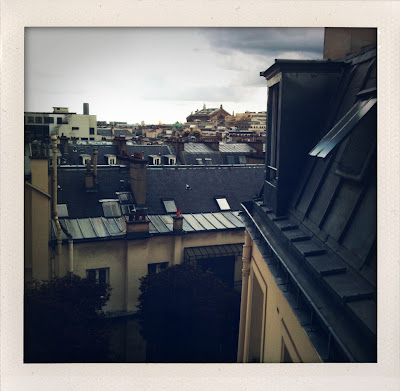 Social media does a lot of things. One of the things it does best is let you construct an image that you wish to project (don’t you love the view from my window above?). For myself, that tends to mean sharing the good stuff. Of course, I love the bad stuff when it makes for a good story. Lately I’ve been getting more emails asking me how they can move to Paris and seeing folks on Twitter planning their great move. Meanwhile, my friends and I debate daily if, and how, we’ll be able to stay. Don’t get me wrong, there are so many great things about living in Paris, but as I and my classmates and fellow Americans can attest, there are a lot of hard days too. So this series is designed to break down the glamour and share a little more grit in the day to day life of living in Paris. So let’s start with Chapter 1: PAPERWORK

PREFACE (aka before you go)
Even on American soil the trials in tribulations of French bureaucracy start to feel like a reality. But you’re so excited to move to France that you hardly let them get to you. Instead you blame it on the fact that you have too many things on your mind like what to pack and where your favorite boulangerie will be. For me, after being accepted to my University my student visa process started with something called “Campus France” – an online forum to “ease” the process of getting a visa. My favorite question was “list 3 activities you’ve completed in the past 3 years.” Now this question did not make any sense to me. Did they seriously want to know that I participated in the waterballet in Baltimore? It wasn’t until months later that I realized this question was designed for undergraduates – not old people like me. Bureaucracy, fail.

Time warp to going to the consulate in DC to submit my visa forms. Lucky for me I lived close enough to DC that this was doable, yet also a pain as they have tightly scheduled online system. As with living in France, you should not only bring every form they ask for to this meeting, but also every possible form you could think they may ever ask for in their wildest dreams. It is no joke. Luckily I passed the test and had all my forms the first round (so I could entertain myself through critiquing the awful and inefficient signage in the room – hey, I’m a designer!), despite feeling on edge while there. Meanwhile, the girl next to me was sent home for being inadequate. Did she ever make it to Paris? We will never know…

BEING THERE
There are two things you can never have enough of while living in France – passport sized photos and stamps. Now there are photomatons all over the city, but I’ve always been instructed to go to a “approved” photo store on Rue Jean Nicot in the 7th. I don’t really see the real difference, but I just know I don’t want to be sent home. I think the owner is really good at reminding you not to smile in said pictures – which is very reflective of the tone of all French bureaucracy. But I can’t help but see the irony in the fact that he takes my picture with a digital camera, yet no other organizations have discovered this wonderful invention yet. All the while, I’m not sure why I continue to only buy 4 at a time – I really should have invested in 50 ugly pictures of myself the day I arrived. (I use them for my library pass, my pool pass, my museum pass – everyone wants ugly pictures of you!)

As for stamps, these aren’t your typical stamps – they’re OMI stamps. I don’t know what that means, but in my mind it translates to Oh My! Those are expensive stamps. Not only do they cost 15 or 30 Euros (depending on the form), but then nothing real every really happens with them. I guess they do get licked by an official person, but then they stick them on a piece of paper that no one will ever look at again. I guess I’d feel better if they mailed me a form I didn’t understand or something with them.

Now my greatest experience in paperwork deals with getting the carte de sejour – the card with the ugly picture of you that validates your visa to live here. You collect LOTS of forms – proof of housing (a chapter on housing coming soon!), proof of student status, proof you have at least 400 Euros in your bank account (good luck with that after buying all those stamps), a “real” stamp – that’s (only) 5 Euros – from La Poste. I’m sure there’s more too, but trust me, it takes a good week to get everything together. Oh, the bank is closed for lunch? Oh, school is closed for a holiday I’ve never heard of? Oh.

Anyway, I’ve even had a lot of hand holding through this whole process (when you’re filling out the forms DO NOT sign outside of the black box or else you will be in BIG trouble!), yet it still is long and excruciating. Then, one lucky day, several months later, you get an “invitation” in the mail with very little notice (a week if you’re lucky) to come to a very special doctor’s appointment. I think on this letter in very, very small print that no one can read and is written in invisible ink reads: DO NOT MISS THIS APPOINTMENT OR YOU WILL DIE. Or something close to that. In any case, that’s a fun appointment that really makes you feel like you’re one of the French family. They check your eyes and then shuttle you into a little corral-like animal stall to go and have your chest x-rayed. Don’t worry, this isn’t out of the normal at all – everyone’s doing it. And you even get your *FREE* souvenir chest X-ray when you leave. Congratulations, now you and every other foreigner [legally] living in this city have a common bond (and a good story to share).

POSTLUDE
This chapter only provides a brief introduction to the paperwork of French bureaucracy that repeats itself annually, and somehow doesn’t manage to get any easier with the passing of time. Perhaps one day I’ll be able to update this post with adventures in French Social Security and health care, but after taking 3 months to compile those forms, I have been waiting another 2 months to find the next round of papers I must dig up. Oh and heads up, on Social Security you will have the joy of having your birth certificate translated into French. Despite the fact that any French 101 student could complete this task, you instead need to go to a professional translator. No, not any translator, but one approved by the consulate, who will run you at least 50 Euros. Now that’s one way to support the economy.
TO BE CONTINUED…

note: My experiences are primarily based on being a student (which as a later chapter will attest is one of the best and “easiest” ways/excuses to move to this city). I first came to Paris in 2001 on a 3.5 month study abroad program, in 2003-04 I taught English in a French highschool through a teaching assistantship offered through the French Cultural Ministry. These days I’m finishing up my Masters at the American University of Paris.

Paris en Hiver {Winter}Live Like a Local. Go to a {Greek} wedding.