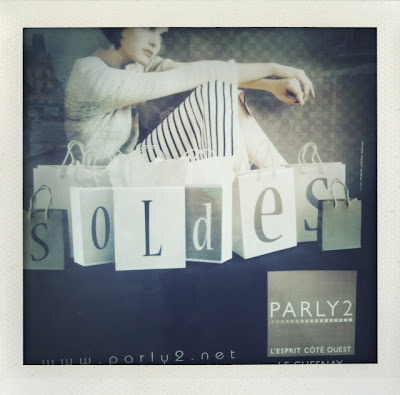 In my mind Christmas in the US has come to equal consumerism and materialism, something that my student budget and 12m2 can no longer support. In France consumerism’s most apparent visualization is in the form of les soldes – literally “the sales” – that happy twice yearly. From mid January to February 15th, and again for a month starting in July, massive price slashing happens to make room for the new season’s shipments. As the weeks pass the deals only get better, but be smart or everything on your wish list will be bought up.

Walking the streets of Paris today there were so many people with multiple, over-flowing shopping bags, you’d think it was Christmas tomorrow. I don’t know about you, but I think it’s refreshing to separate the shopping from the holiday. Sure people still go shopping for Christmas presents here, and there are decadent window displays at the grands magasins [department stores] but the real craze (à la “black Friday” – the day after Thanksgiving) started today with Les Soldes. I think it’s also one of the secrets as to how the French stay chic – buying less, but buying something special, and getting a good deal. Regardless, les soldes are another good reason to travel to Paris in off-season!