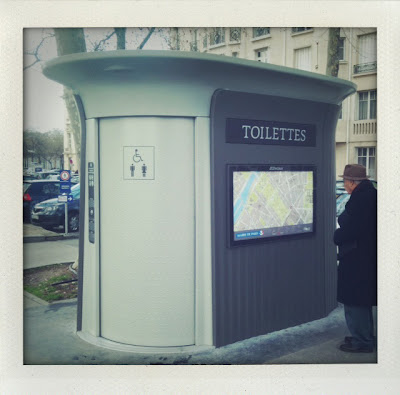 Week after week through my {Un}Glamorous Paris series, I think I’ve come up with the most unglamorous side of Paris. But then I remembered: les toilettes.

Starting close to home is the best way to set the stage here. The older I get, not only do my apartments get smaller, but the toilet is no larger part of my actual living space. Yes, while “normal” people typically have to go down the hall to use the bathroom in their own homes, I do the same. I just share it with 5 other people. I also have the added “benefit” of a “fresh” toilette experience, as our shared hallway toilet is not heated and quite freezing in the small, unglamorous tiled room whose lock is shoddy, and multiple times a day I fear being locked in there forever. The other “perk” is that I have the privilege of bringing my own toilet paper with me each time I go, so I know no one is using mine. Talk about glam! But the good news is most of my student friends in Paris are in the same boat. Oddly, we are becoming French and realizing, c’est normale!

Despite being a shared toilet, the cleanliness isn’t really an issue (I have good neighbors, except for the one who decided to have a party from 1:30- 6:30am last Tuesday “night”). It’s just a toilet. Then I come back into my apartment to wash my hands. A sink with the toilet would be a nice perk, but alas, non.

But this isn’t just me in mon petit appartement. Many apartments in France have a separate “toilet room” and then you have to find where you are supposed to go to wash your hands. Usually there is another room for this, but I usually just opt for the kitchen because you are insured to have water and soap available. The other trick you must understand about French apartments is that the French are very private people. They like to keep all doors closed. So it’s a bit of a guessing game as to where to find les toilettes. Hence, it is also a mission to find where the sink is. I’m telling you, when in doubt, just go to the kitchen!

One of my favorite things in Paris is to wander the city for hours on end. It’s a great activity that falls nicely into my budget. The only catch is finding a bathroom. So here are a few tips: McDonald’s besides having the best free Wi-Fi in the city is always sure to have a bathroom, Le Starbuck – also bathrooms, and les grands magasins [the big department stores]. Note: sometimes you need a code printed on your receipt to get into the door – because of people like me – but just wait for someone to come out, or politely ask someone to give you the code (I’ve been asked before and happy to share my knowledge). If you’re not a complete cheapskate like me, you can go to the local brasserie, and order un café while standing at the bar (the cheapest way to get a beverage in a cafe) and take advantage of their facilities.

When you’re out and about in the city, the other option are the free, public, gray “les toilettes” all around the city that look a bit more like a spacecraft than a bathroom. I was terrified of these for the longest time. But then one day I was desperate, and I realized it was something on my checklist of “must do Paris,” and I bit the bullet, sent a text to a friend if I got trapped, and went inside the capsule. Much to my surprise, it was quite a pleasant experience, clean, it talked to me, I could was my hands, and when I left the door closed again for its “self-cleaning” function. Now I must admit, that not all WC [water closet] “capsules” are equal. If you’re going for the experience, go to some obscure neighborhood and try it (less popular there). Don’t go to the one near Parc Buttes-Chaumont – that one is definitely gross always a small flood. But, desperate times come for desperate measures. Then of course, men have the option of just peeing on the side of any wall or object [see video], and you can expect that quite regularly.

My final word of warning, is that despite being a developed country, squat toilets do exist in this city. In fact, one of my favorite haunts, Au Petit Fer à Cheval, is an upstanding and reputable restaurant/bar, so it may come as quite the surprise to some that their toilet is essentially a hole in the ground. But it’s all part of the experience…

Les toilettes in Paris are such an experience in Paris, I’m surprised they don’t bottle the fragrance. Madeleine and Republique metros most commonly emit the odor – it wouldn’t be real Paris without a tinge of urine in the metro air.

{Un}Glamorous Paris is a regular column exploring the less-than-perfect sides of Paris with a sense of humor, and helpful information. More in the series:
– Chest X-Rays
– Paperwork
– Finding an Apartment
– Working in France
– Swimming Pools