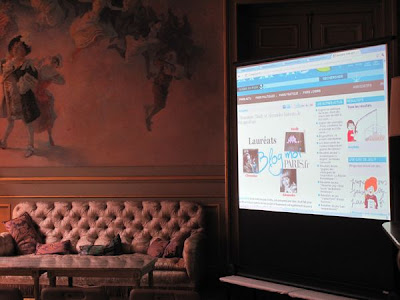 Yesterday I was lucky enough to spend the morning in one of the most beautiful buildings I’ve ever set foot in – Hotel de Ville, the Mayor of Paris’s City Hall. I attended the announcement of the final three winners of the BlogMoi Paris competition hosted by the Mairie de Paris. While my entry wasn’t a finalist, the whole process was still a great experience. I look forward to following the three finalists as they progress, as they have different things to say:

Alexandre’s blog, The United States of Paris plans on exploring Paris and getting to know Paris from the viewpoint of foreigners (comme moi!). His first feature with John, an American jewelry designer is up on his blog.

Clémentine’s blog, Histoire de le Dire is a great way to practice your French through getting to know Paris through it’s people. Check out her teaser to hear what some Parisians have to say about their favorite song or favorite dish.

Sheily’s blog, Sur les Murs, looks at the untraditional art that weaves its way into the environments of Paris, and sometimes into museums.

Click here for more pictures from my mini tour through Hôtel de Ville.