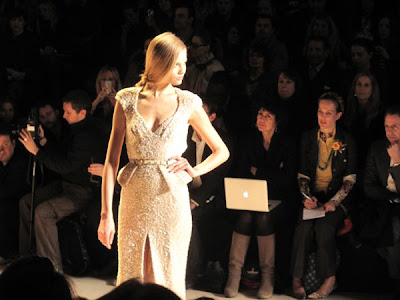 For most people Fashion Week is about clothes and style, and seeing what the next season has in store for us, but for me going to Fashion Week was all about the experience. Lucky enough to score a ticket to this afternoon’s Elie Saab show, I’d know for about a week I was going, but was one of those things where I’d believe it when I was in my seat. Yesterday when I picked up my ticket, I felt a little bit like Charlie and his golden ticket (except mine was white with silver type) going to Willy Wonka’s Chocolate Factory – I was so excited, but couldn’t help but feel a little out of place. 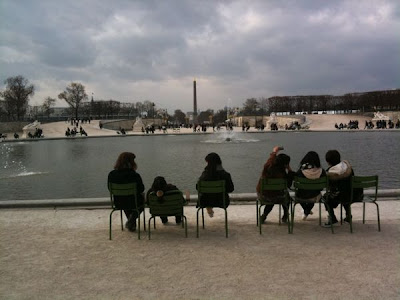 It was a beautiful afternoon in the Tuilleries, sun yet grey and white billowing clouds and people taking full advantage of the almost-spring weather, lounging in the chairs surrounding the pond. While it’s normally cool to be fashionably late, this was one thing I did not want to take my chances for. But I was so unfashionably early that I opted to head over to Rue du Rivoli to treat myself for un coup de champagne. 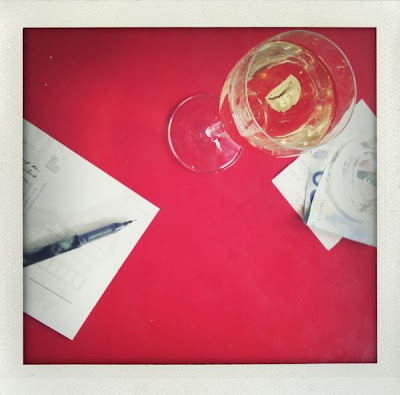 By the time I returned to the make-shift tent, I was finally in the mix, not too late, not too early. Still a bit fearful that I wouldn’t have a seat knowing that my name was ‘Ruxanda’ for the afternoon, much to surprise, one glance of my golden– I mean silver– ticket, and I was in. I was right behind a woman who smuggled her dog it – what style. 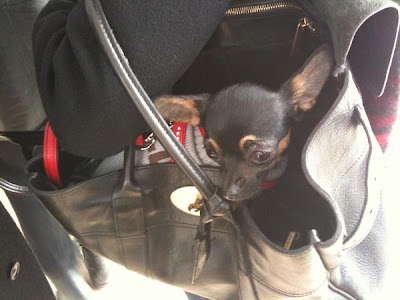 The venue was larger than I expected, walking around a dark hallway to men in tuxedos who ushered us to our seats. As I sat in my seat waiting for the show to start I tried to take it all in, hear the many languages being spoken, observing fashions – which ranged from rustic cabin plaids to jeweled princess gowns, and someone who looked like they came straight from Hogwart’s Academy. 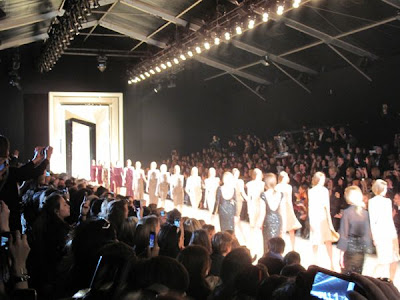 So here I was at a major fashion event, and something struck me about how inviting it was. True, you had to get a ticket to get in the door, but something about it felt welcoming, and I couldn’t help but contrast it to the fraternity and sorority parties of college where everyone seemed the same (at Fashion Week, perfect hair is a matter of opinion). I think it was the range of styles and personalities, and it made me realize how powerful fashion can be as a celebration of diversity. 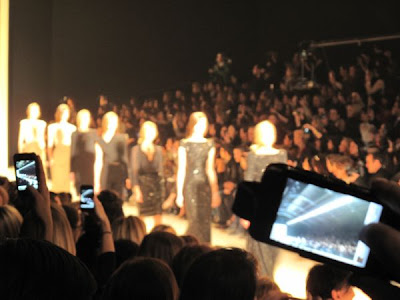 Before the show started the men in tuxes removed the plastic protective covering from the runway, the lights dimmed, the music came on, changing rhythms and the first model emerged from the glowing white door. The whole thing happened fast, taking in the clothes, the models and the reactions of people around me. 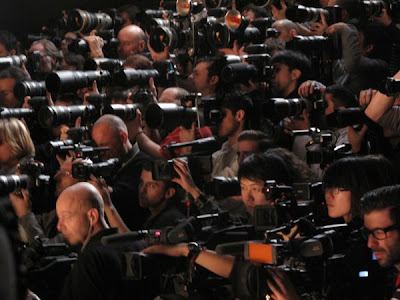 My seat was towards the end of the runway not far from the sea of photographers. As soon as the show started I loved hear the sound of their camera shutters weave their way into the soundtrack. But the best moment was when two models in a row cut their runway walk short (only making it about halfway) and the sea of photographers gave a roaring boo. The two strangers next two me and I had a good smile and chuckle. The next model who made the full walk got the vocal seal of approval from the photographers. After the show someone mentioned to me that in all the hundred shows she’s been too, she’s never seen that happen before. For me it was a genuine and memorable moment. 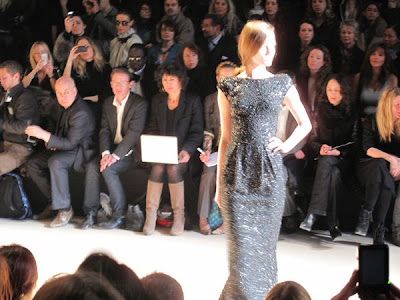 And before I knew it, the designer came out, the show was over, and the sea of people flooded back out. I saw the same fashion student outside who had stopped me on my way into the park (in hopes of a free ticket). I don’t think he got into the show, but I overheard a woman from the Glamour street fashion team approach him and his friends for a picture. It was further proof that just as much fashion happens off the runway these days. If I ever get invited to a show again, I will gladly agree, but if not, I will sit in the Tuillerie Gardens and watch people go by. Even when the models came out after the show, it was pretty clear that they were models – what legs! 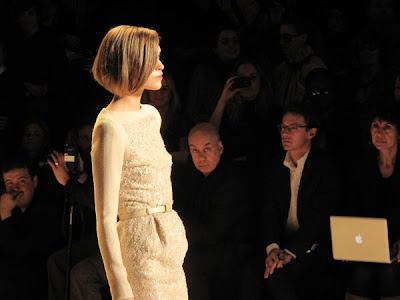 As for the clothes? Beautiful! I loved the collection, but will be looking forward to seeing the shots from the professionals. (I’ll update the post when I come across them, but in the meantime, here are more of my shots). 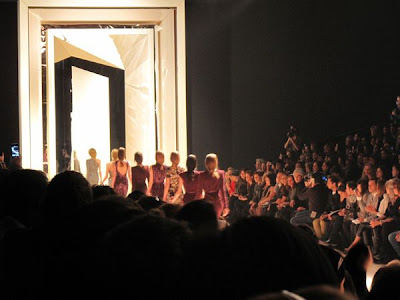 UPDATE: See more of the collection in the UK Telegraph.