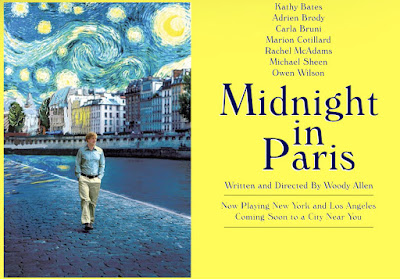 This week I realized how long it’s been since I’ve left Paris, and while I love pretty much every minute (that doesn’t deal with paper work), I find myself going a bit stir crazy (the whole looking for a job thing doesn’t help). It’s almost like I need to leave Paris every now and then, in order to fully appreciate being here. The good news is I have a big trip to the states coming up next month, and a smaller trip down south in the works. The funny thing is that watching Midnight in Paris made me feel even luckier and happier to be here (of course America would make me love France more). I’ve always had a thing for watching movies of places I’ve lived or visited, but I don’t think you need to live in Paris to appreciate this film. While many point to how its ripe with clichés, for me it feels more like truisms and normalcy.

One of the things I liked best about this film was not knowing much about the storyline beyond the trailer, which hints at, but doesn’t give away part of the central story (hence, I will speak in vague language, so you too can have the pleasure of discovery). Travel takes on a new dimension in the plot and the way in which the characters relate to each other in their creative circles actually reminds me a lot of Paris today and how bloggers, artists, designers, and Tweeters are often come together in this city. I savored in the imperfections of the characters, otherwise known as Woody Allen’s angst, which once again, made the fictional movie a bit more real. It was two weeks ago now that I first saw the movie, and haven’t stopped thinking about it. The giant big screen (that I guestimated that 80 of my apartments could have filled the screen) made me feel like I was taking a trip to Paris, only to walk outside into the real deal. Go see it… then come to Paris.

P.S. Speaking of travel, don’t miss this article on why the U.S. is ‘No-Vacation Nation.’