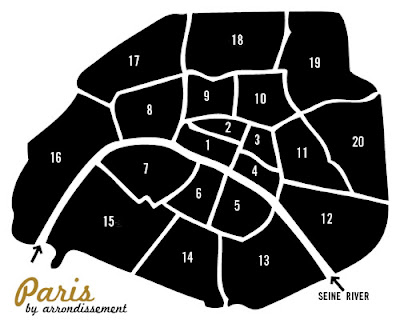 20 arrondissements and 19 guest bloggers later the ‘Tour’ de France, Paris edition has come to a close – for now. All my guest bloggers did such an awesome job sharing their neighborhoods, I wanted to put them all in one easy to find place, and create a giant resource, whether you’re looking for some weekend inspiration or a new Paris read. Mille mercis to everyone for their great work! Bon week-end à tous!

The last 2 digits of Parisian zip codes refer to the arrondissement or district. There are 20 total. The arrondissement appears at the top of street signs, making it quite easy to find your way around the city. Click on the zipcodes below. Happy exploring!

75001 – by Melissa, an American expat working in France and author of Prête-moi Paris.

75002 – by Velib fanatic Emma Bentley who is making good use of her studies in order to live in France.

75003 – by Kasia Dietz who is designing fabulous bags when not off exploring Europe.

75007 – by SF creative couple Jordan and Paul Ferney who moved their family to Paris for the year for a new adventure.

75010 – by Brit Adam Roberts, author of Invisible Paris, an insider’s look at the city, the architecture and happenings.

75011 – by Lost in Cheeseland‘s Lindsey Tramuta, an American expat who knows this city like the back of her hands.

75013 – by Elena Rossini, filmmaker, feminist, founder of No Country for Young Women and creator of The Illusionists.

75017 – by Cat of Sugar Daze, who brings cupcake joy to all expats in France.

75020 – by American expat writer Sion of Paris (Im)Perfect who shares the real side of this city.