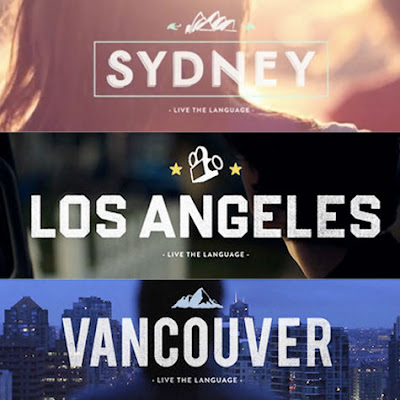 These days my favorite French word is “profiter” because it’s one of those words that doesn’t easily translate, as it includes several ideas at once. English brings up ideas of “profit,” but really the essence is “to enjoy” – another word that doesn’t really translate back into French – while also being “to make the most of.” In fact, this verb warranted a lengthy late night conversation on Saturday between an American friend visiting and French friend as we worked to pinpoint the meaning like a game.

Just as foreign languages embody ideas of culture and concepts that you can’t always learn in a classroom, I love the way in which typography is able to capture certain ideas as well. Several months ago I posted about these amazing study abroad videos for Paris, London, Barcelona and Beijing created for EF.com [Education First]. Now the creative team is back at it with the next three in the series – Sydney, LA and Vancouver – and once again I find myself mesmerized by the typography by Albin Holmqvist (I seriously want access to his font library!). As an American, it’s interesting to see Los Angeles on the list and trying to imagine how a European would see my home country. Study abroad is something I will always encourage and promote to anyone I meet!

Click here to see the others – Paris, Barcelona, London and Beijing – in the series!

UPDATE: Check out Fonts in Use‘s breakdown of the typography used in the Paris video!