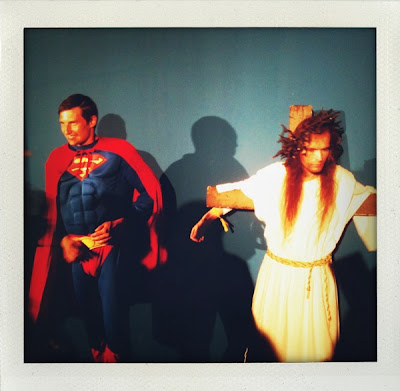 On Nuit Blanche I saw Jesus. I also saw Superman, Darth Vader (with Santa’s beard) and Sherlock Holmes. Inside the Square des Batignolles Fabrice Hyber’s “Arrrghh, boing, zzzzzz” was the definite highlight of the night as superheros came alive, wandered through the park, interacted with each other (who knows what costumes they were left wearing at 7am!) and with visitors. Each location throughout the night took on a quality and vision of its own. 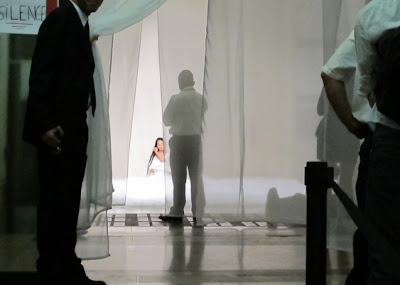 By 4am on Sunday I was watching and listening to Sachiko Abe cut papers in what was a mesmerizing dream. It was one of those things, that I would never have fully comprehended until I saw her sitting in a cloud of finely cut papers. All night, with only a 30 minute break every hour and a half this angelic figure would finely trim (~1mm) the edges of a piece of paper as the audio sound of the scissors cutting was amphlified in the room, then turn the paper and continue cutting. As she sat there looking angelica and completely focused, I couldn’t help think how she isn’t getting a hand cramp and that she must have a seriously sharp pair of scissors. It was a performance I never in a million years could have imagined, but it was a pleasant surprise to find myself entranced. 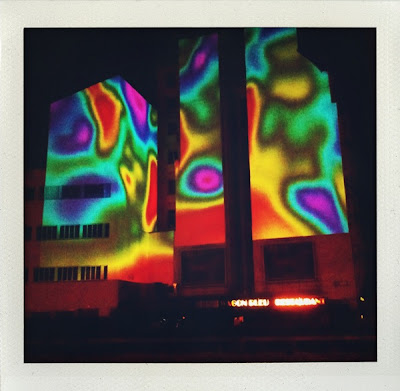 Alongside the train tracks of metro Rome, giant projections were shown onto the side of a 7-story building in Grand Image lab. The coolest thing was there was a second building nearby with other projections that were often “in communication” with the main building. For instance, in one image there was a lighthouse with a rotating light. When it would hit the right moment, the beam of light would circulate onto the second building. All night there were these “Aha! LOOK!” moments… 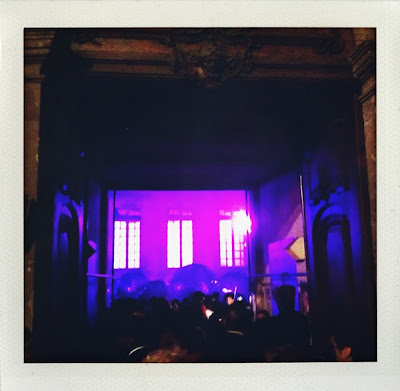 “Purple Rain” was likely the biggest hit of the evening, with artificial rain under purple light and umbrellas in the courtyard of a hotel in the Marais. The mega line down the entire block proved this popularity, but luckily there were alternative ways to experience some pieces (like walking by the entrance).

There was so much to see in the one-night only event. Click HERE to see additional images on Flickr!

Notes for future Nuit Blanche:
– Start early (especially for the “popular” sites)
– Pick up a program at an info stand around the city (sometimes easier than the app and eats less battery power)
– Charge your phone (GPS) and camera battery [added reminder]