These days you hear about 140 character tweets being the new haiku. Designer Anne Ulku and writer Van Horgen had their own idea in 2010 about condensed storytelling, introducing the project Six Word Story Every Day (aka SWSED) where one writes and the other designs. I love too how it has morphed from a project between the two of them, and expanded to a larger project with creative contributors from all over. I called on Anne Ulku to learn more about SWSED and how it came to be, so in her own words—and curated favorites—take it away, Anne! 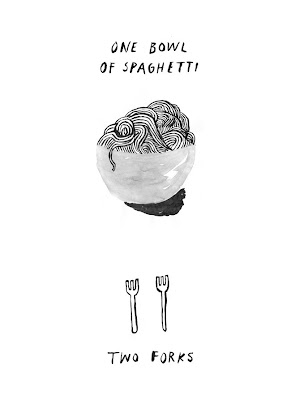 07.26.11
One bowl of spaghetti. Two forks.
Writer/Designer: Lisa Currie
A side message from the author and designer really made me love this story even more. The story is inspired by some of her travel memories, which some of her best involved sharing a meal with a new friend.

Six Word Story Every Day began just before 2010. Van and I met years before that working in an ad agency. The inspiration for the project began with a tweet I sent out Nov 2009 after just discovering “the shortest story ever written” (Ernest Hemingway’s ‘For sale: baby shoes, never worn.’) – in which Van caught attention to and we discussed some ideas. As a copywriter, Van always wanted to find an outlet to explore and write more. As a designer, I was eager to work on more experimental, personal and collaborative creative projects. We both came up with the idea of creating a six word story and design every day for an entire year. That began our year-long phase one of the project. Phase two began a year later with the intention of bringing in and showcasing talented and inspiring peers; encouraging and challenging the art of short-storytelling, language, typography, design and experimentation. It had been an enjoyable process and exercise for the both of us, and we knew others would also agree. 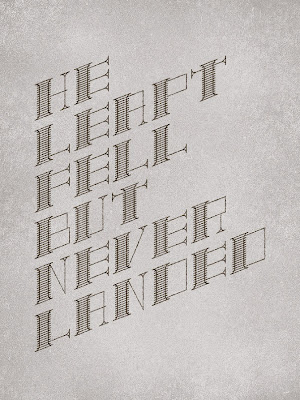 04.15.11
He leapt, fell, but never landed.
Writer/Designer: Evan Stremke
I love the type in this story, where the form almost creates a grid of ladders. I still wonder why and how he never landed.

I am still in awe at how many amazing creatives we’ve had contribute their stories. And so happy the project received such a positive reaction from the public. It has been so inspiring. We are not going to continue posting daily updates on the site, but will still keep the archive up online. Van and I are working on setting up a way to sell some of our own SWSED prints (from 2010). Still working out details though! 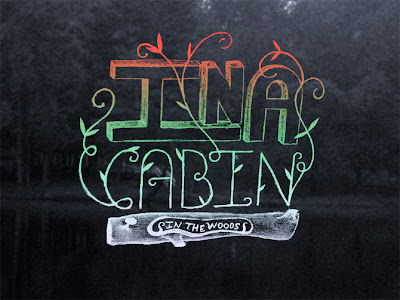 The things I look for in a successful six word story design is both a combination of a compelling story and a beautiful design. A story does well when it’s written from a universal experience, something anyone can relate to emotionally (love, hate, sadness, joy, etc). Even using only six words, a story should have a beginning, middle and an end. But not all details should be revealed. Creating conflict or tension should leave the reader asking questions and interpreting the story with their imagination. 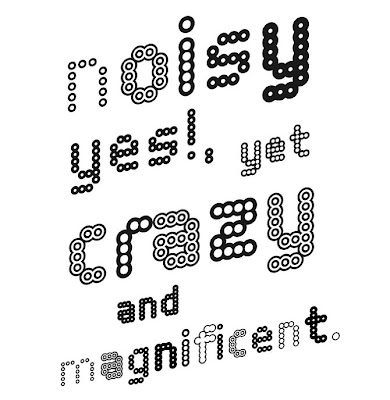 10.05.11
Noisy yes!, yet crazy and magnificent.
Writer/Designer: Craig Wills
I get a sense of what this story might mean by just looking at it, but I still wonder to this day, just what IS so crazy, magnificent and noisy?

As with design, the art should be universal enough to allow readers to get a sense of emotion the story is revealing, but not narrow in on a subject. Since the words were required to be included in the design, I found that expressive typography and lettering that fit the story to be quite successful. These are some of my [Anne Ulku] favorites—or at least some that make me think twice as long as the others. 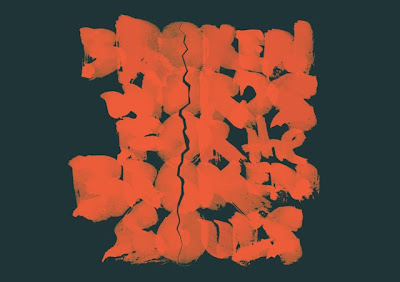 04.05.11
Broken words for the broken souls.
Writer/Designer: Adrián Pérez
The lettering in this design reveals such a raw emotion that even if it’s tricky to read, you can still get a sense of something that has been broken. 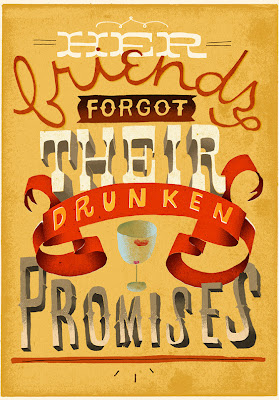 04.04.11
Her friends forgot their drunken promises.
Writer: Dylan Sneed, Designer: Jeff Rogers
I am such a fan of this beautiful hand lettering and I am sure the story brings back memories of those promises once sworn over too many drinks. 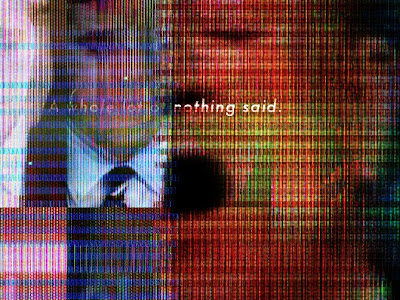 05.11.11
A whole lot of nothing said.
Writer: Katelyn Regenscheid, Designers: Peter Smith and Karl Frankowski
I love how this story and visual can easily be interpreted about media and television. Those fuzzy, rambling conversations without purpose or direction . But the story is also quiet, with literally nothing to be said. 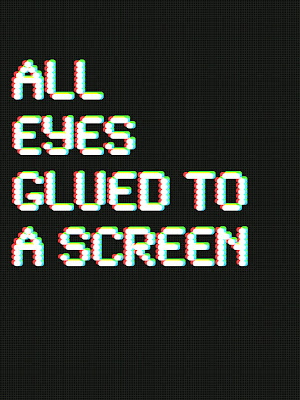 09.11.11
All eyes glued to a screen.
Writer/Designer: Noah Batterson
By chance, this story just happened to be posted on 9-11, and was incredibly appropriate. 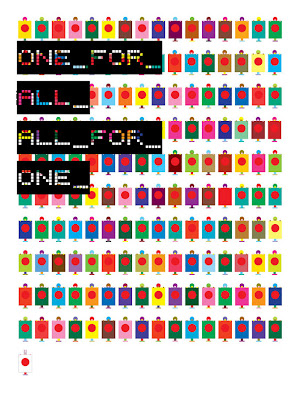 03.14.11
One for all. All for one.
Writer/Designer: Erik Brandt
An incredible story and design that was submitted in recognition and awareness of the earthquake and tsunami in Japan. 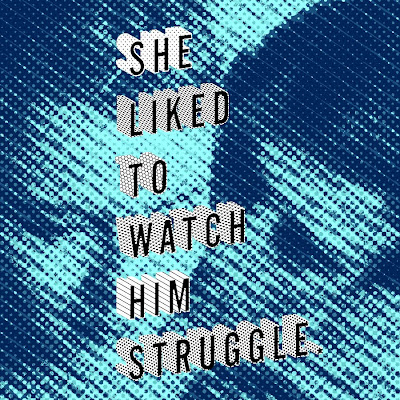 11.14.11
She liked to watch him struggle.
Writer: Betsy Collins
Designer: Sergio Monterrubio
I’d like to laugh at this, or feel bad, but it also could be a bit sinister and dark.

Thanks to Anne Ulku for the added insight into this fabulous project and for curating her favorites! Don’t miss a “sneak peek” into her home/studio!