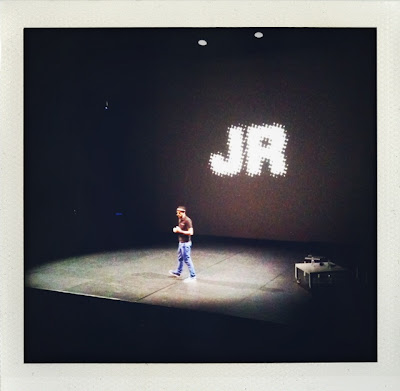 Lately I’ve been discovering a lot of really awesome Frenchies whose work is really inspiring, so I wanted to start a new column “French Inspired” to introduce you to their work and story. Also, I’m out to prove that inspiration on the web doesn’t always have to be in the tangible form of a product. For me, 2012 is the year of “action” and doing things, so I love looking to people doing just that. In the process, too, I feel a little more French every time I learn about one of these folks doing great things.

While JR may not be a household name – yet – chances are you’ve seen his images: giant eyes peeking out of a favela in Brazil, Face to Face pairing Israeli and Palestinian portraits, faces on roofs – and trains – in Africa, Wrinkles of the City in LA. In Paris in 2009 he continued his project Women Are Heros by covering the quais around the iles Saint Louis with faces of women.


For the past month or so, there was a gallery show of his work at Galerie Perrotin in Paris that I ran to on one of its final days. There, a giant eye had covered the facade of the gallery, and inside I was mesmerized by the large format photos. His work becomes as much about the installation itself as the way it lives on (and decays), and captured through more images. I sat watching the videos of his work so long that the gallery closed and I was kicked out. His ventures are non-commercial, and without sponsors, so it the sale of these stunning photographs, and films created during the project, that make this dialogue of ideas possible. 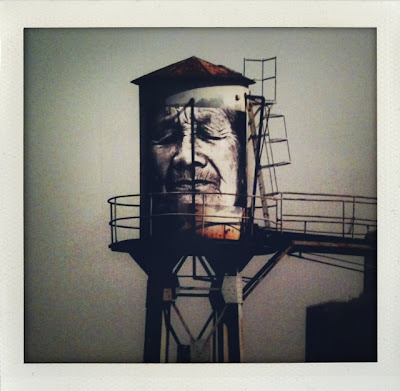 So I was luckily enough to get a seat Monday night at the Centre Pompidou for a presentation of his work by JR himself, followed by an interview (top image). One of the ways it struck me most was the way he talked about his work as a form of communication, as he shared the stories behind the images. Members of the communities are key players in the exchange and discussion of the art projects (the favela he covered in Brazil is the most violent, and he talked about the challenges and ways he earned their trust). Meanwhile, when he puts the images into a book, suddenly they need more explanation. For projects like he did in Africa (passing train below), the art also has a function, as the rooftop faces were made of vinyl, serving the added purpose of protection from rain. Everything becomes layered, where there is a moment that makes you think. This is art. 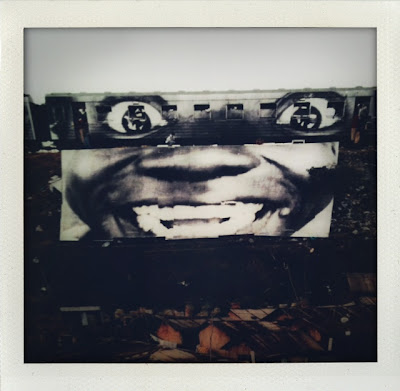 In 2011, JR won the TED prize. Hear him speak about his wish to use art to turn the world inside out (MUST SEE below). After winning this prize, JR launched his latest project, Inside Out that invites anyone to submit their own images, that will be mailed back as prints (for free), and join in the installation. The conversation continues…

JR’s site is full of inspiration. (It’s all Flash, so I couldn’t link to the specific projects above, but definitely check it out).