How to Crash a French Countryside Soirée A couple summers ago when I was a nanny for a French family, I heard mention of these so-called fêtes désguisée (costume parties). They were described to me as very elaborate (one was pirate themed and in a chateau!), and some folks were more into the idea than others – clearly a lot of effort goes into them. While I didn’t get the “costume” memo for the party I was invited to over the weekend, I soon learned that these parties are the true year-round solution to the lack of Halloween in France.

My invitation was a return to the French countryside (the same place where I spent Christmas). I couldn’t help be amused by the fact I didn’t know the guy whose birthday it was upon arrival. Thankfully, the people I hitched a ride from out of Paris (who I met when we got in the car) didn’t know him either, so at least I wasn’t the only party crasher in the mix.

The setting was “the Chapel” in the backyard, a space that has long since been transformed and now makes the perfect party setting. The entire party started very unsuspectingly. Everyone was dressed normally. In the car I had rushed to change my hair to have three small buns, as I had completely forgotten the theme of the party was “3” in honor of the 33rd birthday. Alas, it wasn’t until Marge and Homer Simpson arrived, complete with awesome blue beehive wig, and yellow painted skin (legs too!) that the night started to transform itself. Then Inspector Gadget and Penny (known as Sophie in the French version), along with their dog Brain (aka Fino for the French) showed up. Yes, this house was known for hosting fête désguisée, and people got into it (tons of old photos on the wall served as proof). Then the birthday boy came back dressed as God, followed by someone else as one of the three little pigs. (The secret to going to a French fête désguisée is knowing they bring a change of clothes, so eventually they can return to their own selves by the end of the night, or make a dramatic entry at any time.)

As the night rolled on, the music, dancing and overall merriment continued. Then the true “spirit” of the night showed up. One of the guests disappeared, only to reappear, but now only wearing two records to cover his front and backside. He strolled in proud of his costume, as if it was a badge of honor. The best part was that I later learned that of all the guests, he best stuck to the theme. It turns out there are 33 turns on any record. This was another moment where I kicked myself for not charging my camera battery for the evening.

The more time I spend in France, the more I realize what an integral part of the celebration champagne is. For the past few weeks I’ve found myself with bottomless flutes of champagne in my hand on several occasions. The raging headache the next day is teaching me to cut myself off more, but alas, I assure you it is an integral part of the French experience. You may as well treat it like water.

The amusement of the night started when we arrived at the house only to realize that my ride wasn’t going back to Paris that night, so I guess that meant I would just be forced to profiter from the party and stay all night. Who needs sleep? Much to my amazement, the dancing really did go on until the wee hours of the morning, much like my first French wedding experience, (which I also crashed) last fall. The moves became more and more interpretive as the night rolled on, with a mix of ballet jumps and spins (especially entertaining, knowing that these were talented musicians behind these dance moves). Little by little the party dwindled down, and people hit the hay wherever they could find a space. But the best part for sure of the late night French party is waking up the next morning (errr, later that day) to laugh about it and share stories from the night before, comparing notes and piecing together tidbits of what we each had missed. Très amusant. 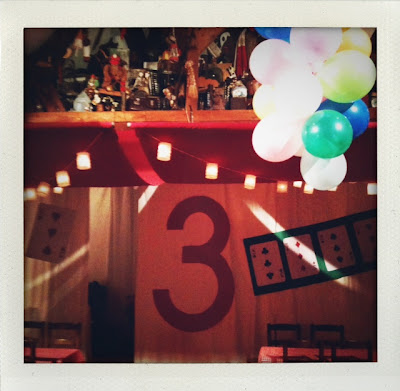 A few tips for attending a French soirée or fête désguisée :
– Charge your camera battery in advance
– Bring a bottle of champagne
– When the French say costume party, they’re not joking. Go all out. (And it’s totally acceptable to change into normal clothes once you’ve had enough of the wig and entire ensemble)
– Be prepared to dance until the wee hours of the morning
– Figure out your ride home and where you’re sleeping in advance (or not – it was kind of entertaining to wing it, and makes for a better story)
– Expect to do laundry in the days to follow. Cigarettes are guaranteed at any party with the Frenchies, even inside.

{I forgot to charge my camera battery and the iPhone photos didn’t turn out as well as hoped in the low light. Use your imagination!}