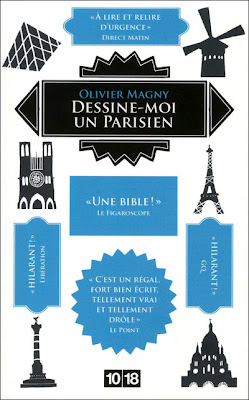 Part of the joy of living in France is the game that is trying to understand the French. Overtime one starts to make observations, then ultimately it comes up at dinner conversation and everyone laughs with the discovery of these slight true-isms. For Christmas my friend Sarah gave me a copy of French sommelier (of Ô Chateau) Olivier Magny’s book Dessine-moi un Parisien, which I couldn’t have enjoyed more. Based on his ever popular blog, Stuff Parisians Like, the book is a humorous (and real) look at Parisians, from a Parisian himself. Discussing anything from the mass popularity of cherry tomatoes to the fact that you can judge the age of Parisians by whether they’re wearing jeans or not, the book is loaded with tons of French-isms, along with catch phrases at the end of each succinct chapter to help you on your way to being French. I love too that when I had French friends over they found it just as amusing–and true– as I did. Although it doesn’t have nearly as cool a cover, you can find it in English too, under the title Stuff Parisians Like.

This all got me thinking, what makes people sound French. Below are a few of my own favorite French-isms. Add them to the start or end of a sentence, and you’ll be set!