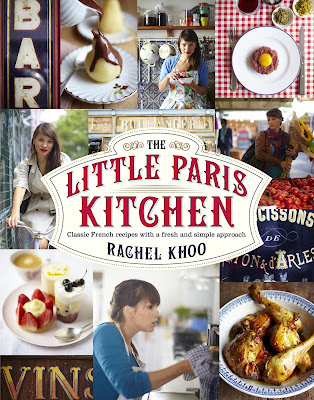 Earlier this week there was an interesting article in the New York Times about modern day cookbooks and the line of production (aka ghostwriters) behind them. I found it particularly poignant, as I’ve been reading Julia Child’s book My Life in France. The book has fully entrapped me with Julia’s passion for life and zest for food. ‘The Book’ (as she calls it) that would be coming the enormously successful Mastering the Art of French cooking was a 10 year endeavor and extremely well researched and tested labor of love. It stands in high contrast to the books described in the NYT article.

Given the current climate, I couldn’t be more excited for my friend Rachel Khoo‘s latest full length cookbook, The Little Paris Kitchen. I still remember when she called a bunch of us to tea one afternoon to tell us the news. And while she wrote (and Penguin published) in what feels like record time, I can assure you that every thing that went into this book is her own (she even did the illustrations). She opened La Petite Cuisine à Paris (the site has since been updated) out of her home over the summer where she’d post openings (for 2, all there is room for in her apartment) to test recipes. I was lucky to go to La Petite Cuisine à Paris with Elodie Rambaud, stylist on the project, and for Rachel’s two other cookbooks. I can assure you that everything we ate was magnificent. Then, this fall we hosted a party to celebrate Rachel’s completion of the manuscript, which I got to write about for Anthology Magazine‘s Going Global issue (such a treat!).

The book, full of traditional French recipes but with a modern twist, is released today – March 15th (great timing, aka my birthday!!!). You can order a copy on AmazonUK. [Note that the book was published in the UK with European style measurements. A “translated” version for American audiences will be published later this year by Chronicle Books.] And if that’s not enough, those of you in Britain can catch Rachel’s new show, also called “The Little Paris Kitchen” on the BBC2 starting March 19th! Huge congratulations, Rachel!!!