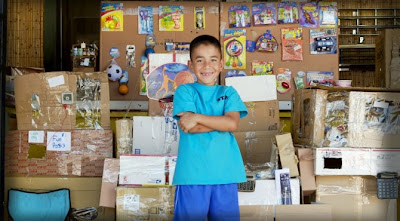 If I were anywhere close to LA right now, without a doubt I’d head to Caine’s Arcade. In an era where technology and belles and whistles have taken over the pure joy of creating something out of nothing, 9-year old Caine Monroy’s story of the cardboard box arcade he built in his father’s shop (arcade only open on weekends), is truly heart-warming and inspiring. I love his creativity and ingenuity from how tickets are dispensed to the way he created a claw game using the simplest of tools – a box and an S-hook. But despite all his creativity, Caine didn’t have many customers, until one day, by chance film-maker Nirvan Mullick passed by and realized this was a story too good not to share. So Nirvan, with the help of a few friends decided to make a film, and organize a surprise flashmob for a day at the arcade. The story is amazing, endearing and genuine. Now the idea is to help raise $100,000 so Caine can go to college, which has already been surpassed. You have to watch the video below to get the full, awesome impact of Caine’s creation. Just be warned, you may get a bit choked up, but in a good way.