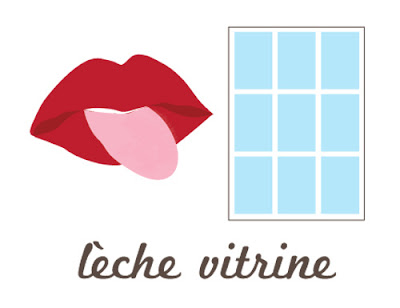 If there is one thing the French have made me that I was not before, it’s a window shopper. With their adorable displays, items and prices listed (required by law, yet oh so practical, so I know if I should even bother going inside) and their signs that say “vitrine en cours” [window in progress] when either element is not yet up to par, there is a certain attention to detail and je ne sais quoi that pulls me in. But in France one doesn’t just window shop, you lick the windows – lèche vitrine – when you’re eyeing something new. French friends, correct me if I’m wrong, but to say you’re going window shopping you can say, Je vais faire du lèche-vitrine. A good time to go lèche vitrine would be for three weeks in January, and three in July during les soldes [the sales] when everything in the city goes massively on sale to make room for the new season stock. Then you can actually afford to acheter [to buy] something!