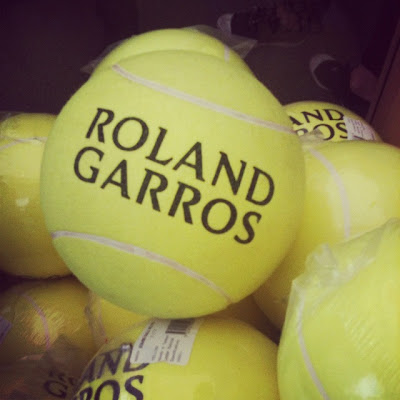 The French Open, also known as Roland Garros is one of four major international tennis matches making up the Grand Slam. For two weeks at the end of May and early June each year, the stadium with the same name, located in the south west of Paris hosts the leading clay court tournament in the world. A complete novice to tennis, I couldn’t help but think of my day as a visit to the Disneyland of tennis. 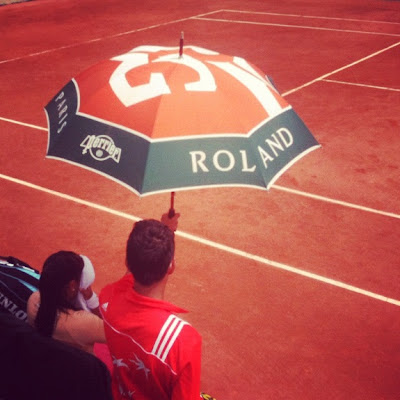 I scored my ticket thanks to Gary who was smart enough to buy tickets back in Feburary (and posted about it on Facebook). Not knowing who would be playing in the match nor who would be accompanying him, it all worked out, we all had a great time, and I was happy to have the opportunity to try a new French experience. A quick note about tickets: They’ve done a lot to eliminate scalpers. The original ticket holders can “resell” their tickets as they wish. Once I told him I was in, he was able to put my name into the computer system and issue my e-ticket through the site. Once in line, I scanned this ticket to get a smaller, silver-backed official ticket with my name on it, which I then showed along with my ID to get in. Therefore, I would highly advice against trying to buy tickets on the street. 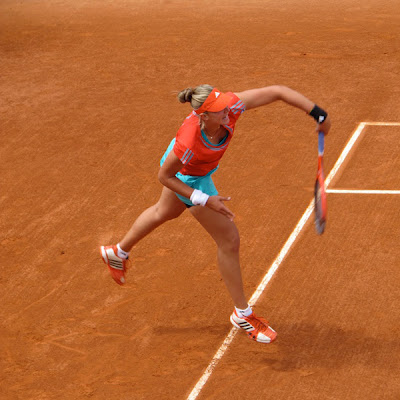 Getting to Roland Garros is easily accessible from anywhere in Paris, by line 9 (Michel-Ange Auteuil or Michel-Ange Molitor stops) or line 10 (Porte d’Auteuil or Boulogne Jean-Jaurès) for the price of a normal metro ticket. Just remember to purchase your return ticket early, otherwise it’s going to be a long wait to go home. 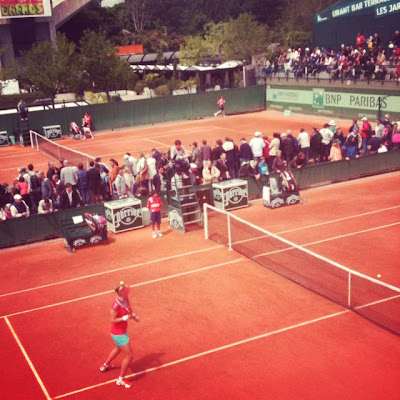 The morning is a great way to get your bearings. I watched some warm-ups as I ate my lunch and then some of the smaller matches. As someone with a very minimal knowledge of the sport of tennis this served as a valuable crash course before the main event. 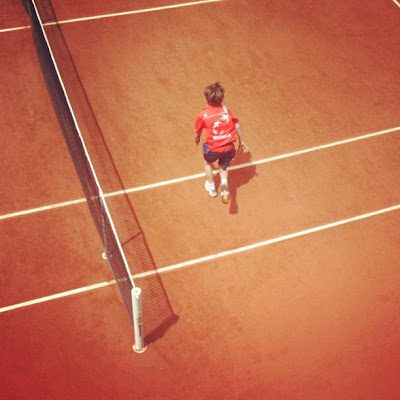 Almost more fascinating than the sport itself was the “ball boy” culture (yes, there were girls too, but I never picked up the more PC term). There’s an entire unspoken language of communication as they work together to keep the balls off the court and in the right hands. Clearly it’s a high honor for these kids. I could spend an entire day just observing this phenomenon. 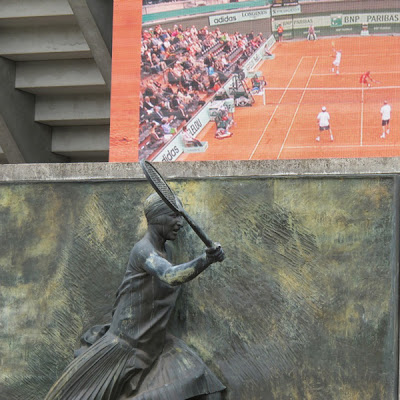 There are three major stadiums within the overall complex with matches happening simultaneously. It’s nice to be strolling around and take a peek or follow a match on one of the jumbotrons. While there is an app you can download for the event, the lack of strength of the 3G (and so many people), makes these screens the best way to keep up with everything that’s happening. In between the “streets” are lined with boutiques and foodstops. Compared to most venues the range of bagel and baguette sandwiches, sushi and hot dogs wasn’t as expensive as one would think (but stay all day and it can add up). The 4 Euro Perrier, however, was a friendly reminder that you’re helping pay for all the sponsorship signs around the grounds. The other perk is that you can eat in the stadiums. 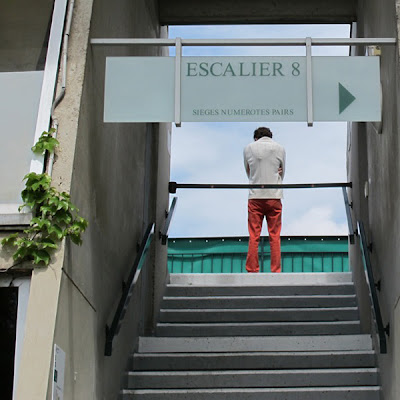 There’s fantastic exploring around the grounds of the venue. Fit in a little tour between matches and don’t be afraid to venture up stairs when you can to take a peek at what else is happening. 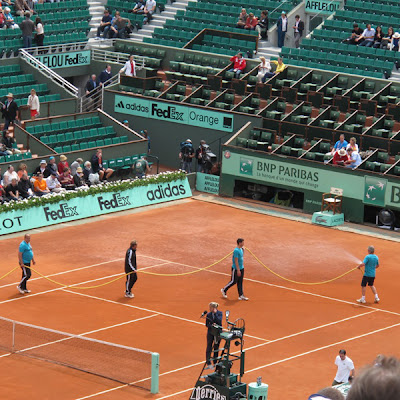 Throughout the day I became obsessed with the color of the clay courts (can you tell by my pictures?). There is the important task of watering center court, which has a strategy of its own. 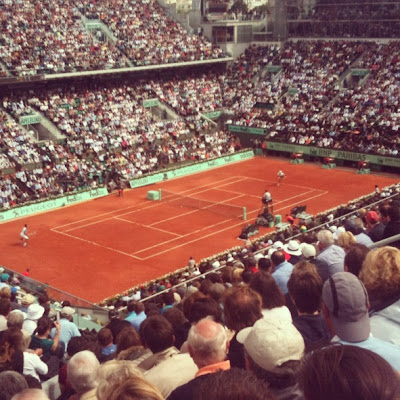 At 2pm the main event started: the quarter finals for the women, and then the mens’ singles. With a little luck I caught what turned out to be “one of the best matches of the year.” So between this tight back and forth fight to the end, and the chatty commentary of the French women behind me, I feel like I have a solid knowledge of tennis as a sport, et en français now. Four hours and nine minutes and 4 match-points later, Serbian N. Djokovic, beat out the local favorite, Frenchman, J. Tsonga in the fifth set. 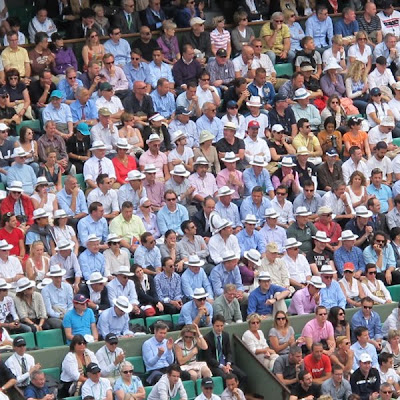 Clearly, one of the best parts of the day is people watching. These folks with the matching hats are likely sponsor types (taken with major zoom). We, on the other hand, were second to the last row in the corner. However, we had the perk of peeking over the wall to check out the score of the neighboring match with Federer on the jumboton in view.