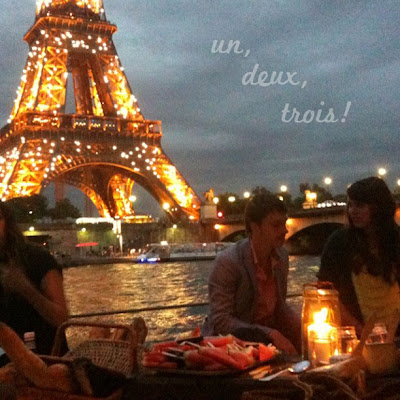 Today marks three years since I first landed in France to start my new adventure in grad school, that led to my own freelance business. Technically it’s my 3rd time living in Paris, so one can only hope third time is the charm. Sometimes I think if I knew everything I knew now, I may not have come in the first place. But there’s never a day I regret the decision, and as the saying goes, what doesn’t kill you makes you stronger. And with each hurdle of French bureaucracy I cross, changing laws keep me on my toes – never a dull moment!

Last August, while the French were off on holiday, I was writing a 50-page business plan in French. But that was nothing compared to all the documents – most of them non-existent for me – I had to collect. In late Aug 2011 I went to the Prefecture and handed over everything. I did it! In September I went back and received another updated official document and was informed that this status I had just slaved over in fact had to be renewed every three months (translation: I had to collect another original copy of those god awful documents on a wild goose chase around the city every. three. months.). But in April 2012, I changed my status (I am now professional liberale), and received a card, a real plastic card and not a print out. And none of this would have been possible had I not taken the entrepreneurial/freelancer path I never imagined myself on, but can never see myself leaving now. So I am official… for a year! It was life changing in a way, and further proof that if you put your mind to something, you can achieve it. In my own life I’ve often taken an unlikely road to get where I am, but France sure keeps life exciting. And only now is it something that is less of something that haunts me every day. I can stop thinking, and enjoy. At least until I have to renew.

This summer is very different from last. I’m starting to live like the French (clients not responding makes it really easy not to work in August!). I even spent the weekend in the countryside. But over the past weeks, despite not having an apartment of my own – some would call me crazy, but I love it and the excuse to explore new neighborhoods – I find myself walking around this city I call home now with a smile on my face as I continually discover new things. And while Paris is central to my experience, I also know I would not be happy here if it weren’t for my amazing friends who make even the simplest moments special. Paris has opened so many doors and opportunities at the same time.

Last Thursday I was lucky enough to attend the Kinfolk picnic dinner hosted by Rubi Jones and Tifamade. For those of you who don’t know Kinkfolk, it’s a beautiful print magazine based out of the US devoted to small gatherings (I have an article in an upcoming issue!). The official event post isn’t on the Kinfolk blog yet, but it only seemed fitting to end with a few scenes from that evening. Meg aka De Quelle Planète Es-Tu? always does a beautiful job capturing Paris, but I particularly love how she captured the evening in this video. Despite all the bureaucracy, right now it feels a bit like a dream (and Meg is someone who can relate to that too!). Trois ans… Three years!