Bianca Tschaikner is an Austrian illustrator who spends most of her time roaming the world drawing and traveling. I’m a huge fan of her maps, which if you’ve flown RyanAir recently, you may have seen published in their magazine. And while she does a beautiful job capturing her impressions through her work (which are also available in her shop), I also love her responses below where she talks about the memories of the less than perfect moments of her travels that make for great memories in hindsight. Thanks, Bianca! –Anne 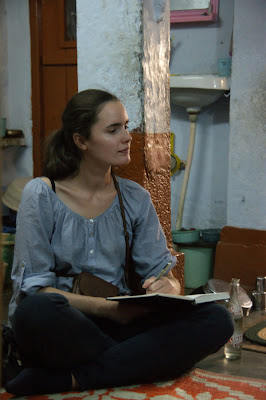 Me drawing in an Indian home in Jaisalmer, Rajahstan.

home town:
My home town is Dornbirn, a little town in Western Austria near the Lake of Constance. Lots of mountains, very green, very rainy.

where you live now:
I’m still looking for a place to settle down. But in between my journeys I still go back to Austria. 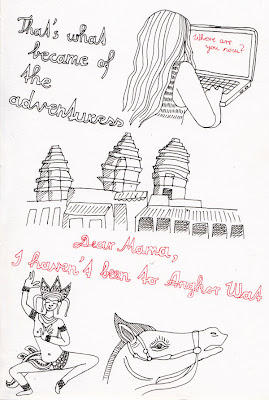 last trip taken:
I spent the last two months in Italy, one month in an artist’s residence on an estate near Rome, two weeks in Florence attending a printmaking school, and another week in Macerata for an illustration course. 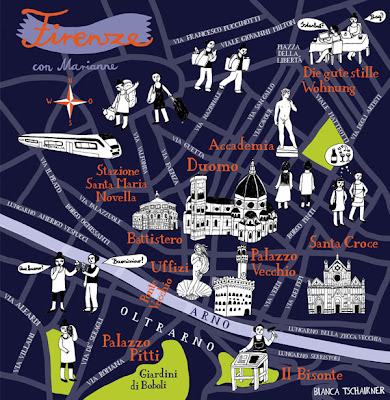 next trip on deck:
Next week I’ll be going to visit Uzbekistan for one month, a country that I have been wanting to visit for years, since the day I inherited a book about the “Soviet Orient” from my late grandfather, who also loved traveling. I’ve always been fascinated by the silk road, so I’m pretty excited about finally seeing the legendary silk road cities of Samarkand and Bukhara. Uzbekistan is a country with a very rich culture, and there is stunningly beautiful architecture, like straight out of fairyland.

one place you would go back to again and again:
There are many! Most of my favorite places have in common an interesting and long history, places that have been melting pots of different cultures and that consist of different layers of history that are still visible in different degrees, especially Istanbul and Rome, but also, to a lower extent, Tangier, Buenos Aires or Bombay, breathing history and magic. There’s something about them. They are also places where I could imagine settling down for a longer period. 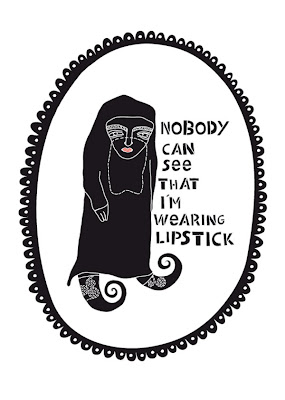 “Lipstick,” part of Postcards from Morocco

place you’d most likely recommend a friend go visit:
Depends on the friend. In general, I think Barcelona is a place with a high potential to suit everyone’s taste, or Thailand. Culturally, Italy has incredibly much to offer. And Marrakech is great fun, too. 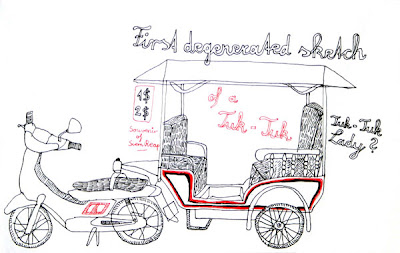 Drawing of a tuktuk in Cambodia.

preferred method of transportation:
I love taking planes for long distance and trains for shorter distances. Taking taxis is always fun. I don’t really like buses, although one often cannot avoid them, but especially in third world countries using them can become rather tiresome. 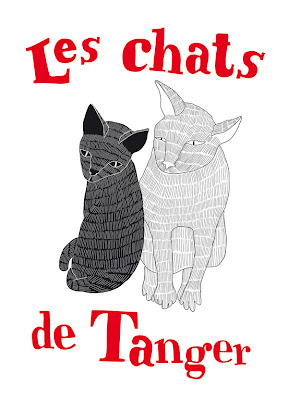 place you’ve never been but dying to go:
There are many countries around the Mediterranean I would like to visit, above all Greece, for the antique temples and sculptures. I would also like to see more of Turkey, then Syria, Lebanon and Israel, and Central Asia. Then the South Seas, and Madagascar, Zanzibar and a few other Islands. Actually, there are few countries where I wouldn’t want to go. 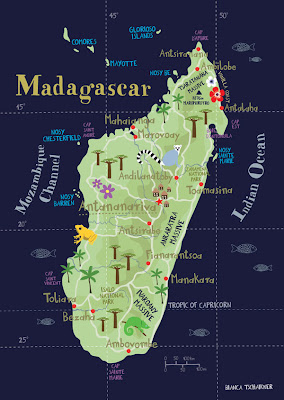 Map of Madagaskar (although I’ve never been there), print of which is sell in my shop.

place you’d never go back:
Maybe Warsaw, which I visited in winter and which I found very depressing and dirty. But possibly it’s better in summer. And I don’t long to go back to Calcutta, which I found nightmarish and overwhelming, like a huge, noisy and dirty anthill, although I don’t regret having been there. And I never say never.

most memorable trip in 2 sentences or less:
My most memorable trip was a most adventurous road trip with all sorts of vehicles down from Tangier to the Western Sahara, which was the most picturesque and at the same time absurd trip I’ve ever taken. 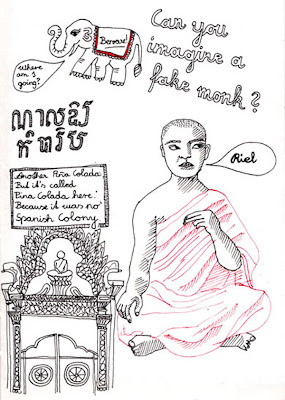 how do you prepare for a trip?
I get mentally ready to go the day I book the trip, I usually count the days, and then I throw everything in a suitcase the night before. I have developed a very relaxed attitude towards traveling. After all, I only need my computer, my credit card and my passport, everything else can be replaced. Right now, I’m reading on Uzbekistan, to get a bit an overview and some practical information, but as usual there are some things I know I want to see beforehand, and the rest I decide when I’m there; I never plan my travels meticulously. I’m also refreshing my knowledge of Russian, which is very poor to begin with, but I think even the most rudimentary command can be useful, and I always find it fun to know a bit of the language of the respective country, even if it’s only a little bit.

how do you record your travels when you’re traveling?
I always write and draw, except on short city trips, because there won’t be any time then. I love drawing in street cafes, and my sketchbook is also like some sort of a visual diary, with a bigger amount of fantasy and freedom, of course. I used to draw an incredible amount of funny drawings in Morocco, about the things that happened there. The stranger the country, the better. Then I keep a written journal where I rigorously pen down the whole journey, which can be a bit tiring, but which is very useful for later on. I have quite a row of journals from different places on my shelves, and I love leafing through them for amusement, because no matter how terrible a journey was, in retrospect they are always hilarious. They are very precious to me. 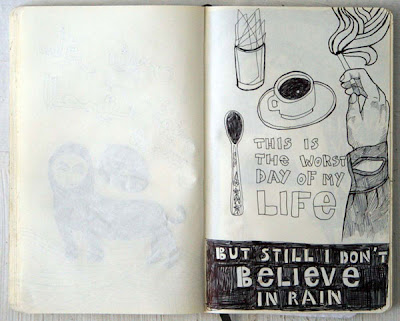 Sketchbook page from Tangier, drawing of my own table in a coffee house.

what is your favorite thing to photograph in a new place?
That depends from place to place, whatever interesting or particular it has to offer. But I’m always happy to get a picture of an interesting face. At the moment, I basically photograph things I might want to draw later on. The last thing I’ve photographed was Greek and Roman sculpture. 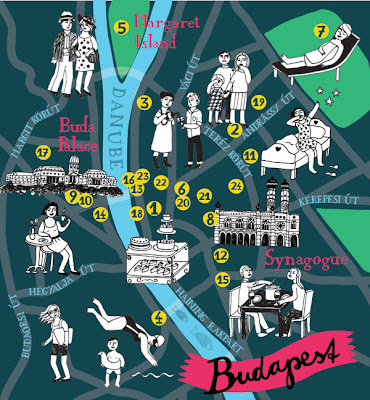 Map of Budapest for Ryanair’s Let’s Go magazine in July.

on an average, how many pictures to you take on a trip?
There was a time I even wanted to become a travel photographer, so then I quite concentrated on photography and made lots of series, but the last couple of times I decided to go around without camera, because on the one side I found drawing a more interesting and personal approach to things, and on the other side I believe that one perceives things differently, more intense and direct without a camera between one’s eyes and the object and without what sometimes feels like the obligation of documentation, the feeling of missing something out if we see a beautiful thing and don’t record it. I also believe the most beautiful pictures are in one’s head. I feel freer going around without camera, because when I photograph, I have to do it right. I hardly took any pictures in Italy, but I certainly will in Uzbekistan.

what’s in your “designer travel kit” ?
I absolutely depend on my Macbook, which is rather battered from being carried around all the time. I also carry a scanner or at least a camera to digitize my work, which, in the case of the scanner, is very tiresome but necessary to digitize my work, because I always work when I travel. Then I carry some sketchbooks or drawing blocks, and pencils, sufficient ink and lots of good ink pens, which can be difficult to get in some places outside Europe. 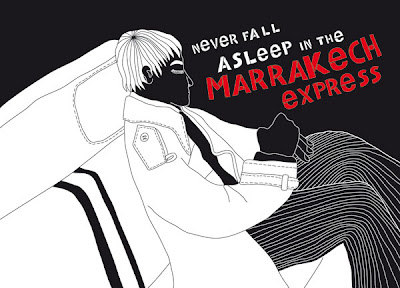 Never fall asleep on the Marrakech Express, which I drew after being mugged in the train. Also part of Postcards from Morocco.

what do you do after a trip? How long after a trip does this happen?
I write about my journeys, but it usually takes some time for me to digest and sort and work on the impressions I got on a trip, to build up some compact memory. Usually it takes me some months, depending on length and intensity of the stay, before I want to use it for my work. It really has to settle down. But what I do immediately is sorting the drawings I made and think of what can be made out of them. I have published a cookbook inspired by my stay in South America, and I have made a little postcard and poetry book about Morocco, where I lived for quite a long time. I am still working on a project that has to do with India where I have been last year. I also made some drawings of Hindu deities which I’m planning on having printed on postcards soon. 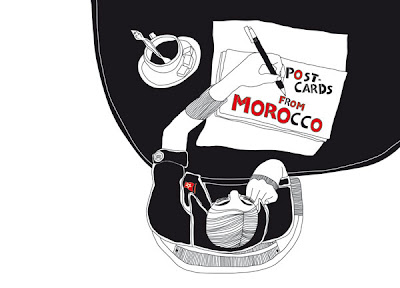 Self portrait in Dakhla, western sahara. It’s part of the postcards from Morocco series which I sell in my shop.

favorite souvenir/thing to bring back?
Anything beautiful, which can also be something with an interesting packaging. Food specialties are always good, or things one can draw on, like Arabic calendars or handmade cotton paper from India. And postcards, always. 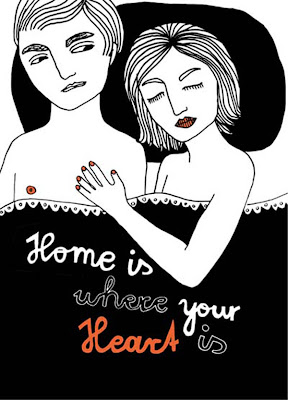 Home is where your heart is. A postcard and poster in my shop.