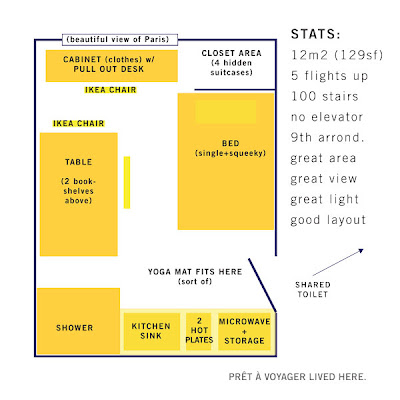 Over the weekend the latest group of students attending the American University of Paris arrived in town. Hard to believe that was me three years ago. Also hard to believe that since first arriving here I’ve only graduated 2m2 – from 10m2 (110sf) to 12m2 (129sf). My friends here have long bonded over our small living, and I have to say it’s one of the most empowering exercises to have to go through (especially when your age is closer to 30 than to 20). I remember having that naïve dream of having laundry again when moving here. And I did, it was just down 5 flights of stairs (6 if you count American style) and over a couple blocks. Finding an apartment in Paris is an emotional task , only heightened by the culture shock, namely of small living. When I go home to the US I try to explain to them the size of my apartment and find myself saying things like “it’s a little smaller than your kitchen” or “it’s pretty much the size of your bathroom.” The thing is, I’m not kidding. And until you see it, no one really understands what our small Paris apartments are like. So, I decided to call on some friends to have them illustrate their first Paris apartment to give you a sense of what we’re really talking about [click images to enlarge]. I should also add that everyone with an apartment pictured here has gone on to do super amazing things, so don’t be fooled by small living. And don’t complain next time you think you have a small place. 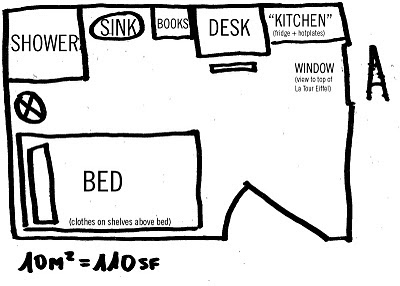 The lead image was the apartment I called home for the past two years (I nabbed it after a friend moved out – the only way to do it – and just moved out in July). Despite it’s quaint size, the layout was super practical, and upon moving out a friend – and myself included – was shocked by how much I was able to fit into such a small space (and this is even with avoiding having to carry much up the stairs). I couldn’t have asked for a better neighborhood and building (see here). The 10m2 (110 sf) was the apartment I called home before that, but the bathroom style sink to do my dishes (and brush my teeth) was not nearly as practical as the kitchen sink in my second place. Oh, and that “view of the Eiffel Tower”? I could see the tippy top of it, but it was a convenient way to keep track of time at night when it’d twinkle every hour. 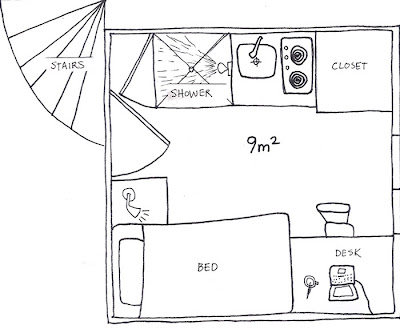 My friend Sarah S. may have won the prize for living in the smallest apartment I ever visited here at 9m2 (96 sf). The irony is I swear she had 8+ people fit in there for a birthday celebration. Don’t be fooled by the spaciousness of these drawings, part of the roof in this case was slanted. 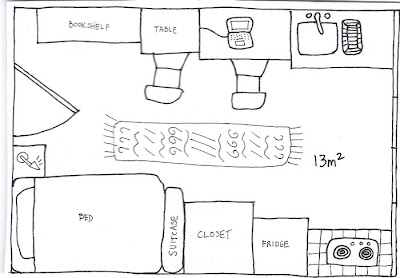 Then Sarah moved into a 13m2 palace compared to her 9m2 place. In Sarah’s words: One advantage to living in a 9 m2 apartment is the narcissistic argument-winning one: when someone complains about dealing with this or that living condition, you can always shut them up by describing the size of your apartment/sharing a bathroom with strangers/etc. (This applies mostly to middle class Americans of course, since are a lot of people in the world for whom that living situation would be an improvement). . . I hope never to live in such a confined space again, but believe that humans should use less resources, and thus hope to carry the minimalist-Paris-student aesthetic with me wherever I live in my life! I will at least be less picky the next time I look for an apartment. 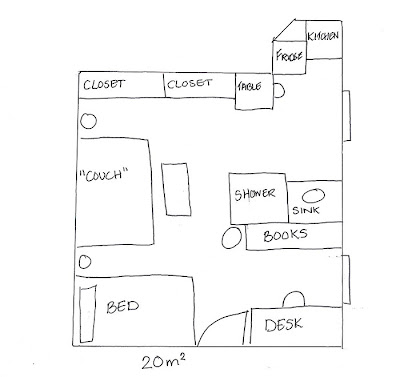 Jen Daly’s first apartment was pretty rad because she had a shower in the middle of it. In Jen’s words: I used to sketch out my apt for my friends back home all the time because they couldn’t understand how my shower was in the middle of the room. The sketch looks so much bigger on paper than in real life though. I actually had 20m2 (215 sf), which is huge compared to yours! My toilet was still in the hall, and my “couch” was an extra twin bed that i made into a sofa. It was a decent sized space, but the upkeep was terrible!!! The windows were rotten, the paint was coming off the walls, the carpet was from 1970, the hotplate didn’t really work, and god only knows how old the mattress was…ahh, the joys of living in Paris! 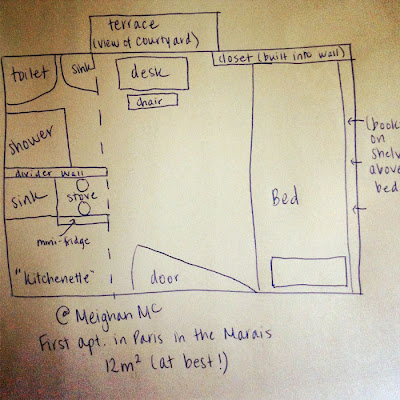 MeighanMc had the luck to find herself living in 12m2 in the Marais. In Meighan’s words: My sketch probably makes it look bigger than it actually was (!) but I loved that little place. It was a shoebox (if ever there was one), but so many important things happened to me while living there that I’ll always have a fond memory of it. And no matter how scary, overwhelming or exasperating life got while trying to make it in Paris… well, I always had my shoebox (with terrace!). 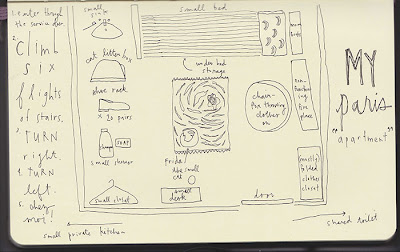 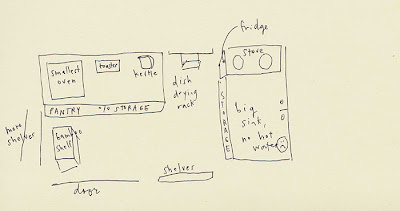 If there’s anything small Paris apartments are good for is that they save gym costs, as they’re typically on the top floor (also means great view and great light) – without an elevator. Tiffany (aka Tifamade) even shares her flat with a cat! At least she has a “private kitchen.” [Click images to enlarge]. 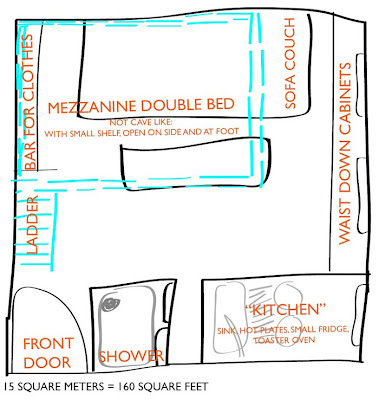 Meg G‘s place is another example of how a good layout can make anything better. In Meg’s words: I lived in the 9th – near Chaussée d’Antin la Fayette. It was itty bitty and so logically set up! I feel like now that I’ve lived in a chambre de bonne [former maid’s quarters], I could live anywhere. 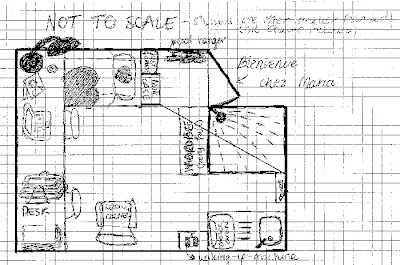 Maria Hertz loved her small living until she fell in love, and needed a bigger place. In Maria’s words: This 15m2 [161 sf] chambre de bonne (in the 16ème) with its slanted roof and 2 sky lights was the first home I ever made on my own. The walls were covered with photographs and posters and I absolutely loved coming home to my own (little) piece of paradise. 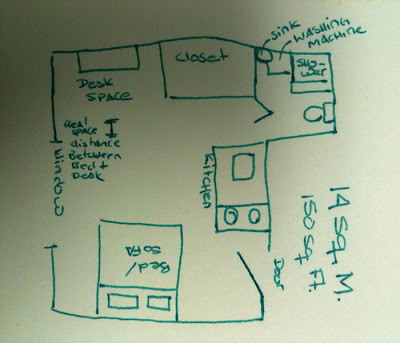 Daniela’s 14m2 (150 sf) pad was in the 5th. She actually had laundry, but per typical European style I’m sure it took about 3 hours just to wash her clothes. 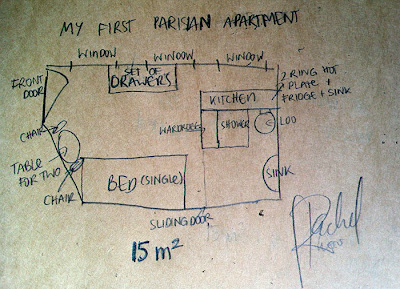 And last but not least a look at Rachel‘s first Paris apartment at 15m2 (161 sf). It wasn’t until she graduated to her 21m2 (226 sf) flat that she landed her book deal + BBC show aptly entitled “The Little Paris Kitchen.”

For more of the realities of life in France, check out my {Un}glamorous Paris column!