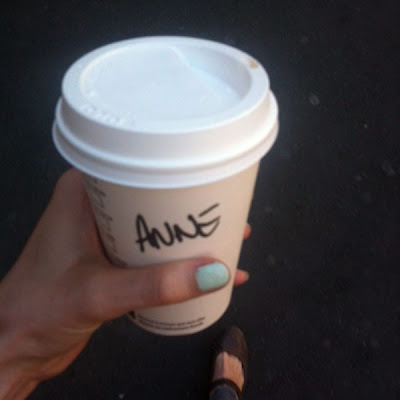 I remember when I was living in France as a teaching assistant 9 years ago and the first Starbucks arrived in Paris. I didn’t like the idea one bit with the fear that the introduction of the take-away cup would ruin the Parisian cultural that has locals holding down a table at a café while catching up on the news or people watching – either way, it was a reason to slow down and enjoy the moment. There are now 63 Starbucks around France, and despite always buzzing – even when they have two locations on the same street – this NYT article claims that the company has never turned a profit here. But I have to ask if Le Starbuck is not making it in France, then how in the world are any of these cafes making it? Regardless, I’ve grown to not despise the mega brand, and even welcome their chai tea latte [very awkward to say with a French accent] from time to time as a taste of home. (David Lebovitz has his own thoughts on why he doesn’t hate Starbucks in France).

But the real reason behind this post is about a subtle cultural difference. I was meeting with a client – at no other than Le Starbuck – and she had been behind an older woman who had ordered a coffee. The young worker asked for her name in typical Starbucks fashion when taking her order (to mark the cup of course). The woman was completely taken aback. This was Madame [insert beautiful French last name of choice here], not whatever her first name is [choose French first name of choice]. Of course this was a French-French cultural exchange, but it’s interesting to see how even in my time in France that many of the cultural codes have been broken down, and how giving your first name to a barista in the US is totally normal, but in France it can be a bit of a foreign concept. As I come across certain political stances that make my blood boil, I can’t help but think how at the base of so many issues (and hatred and anger) is a lack of cultural understanding and appreciation. Starbucks may look and feel the same in France, but it’s still a cultural experience on its own wherever you go. And if something as simple as a name on a coffee cup is embedded with cultural ideas, imagine what else in the world around you holds.

What other cultural differences has your inner anthropologist spotted around France or elsewhere?

Click here for more in the X-Cultural Exchange series.