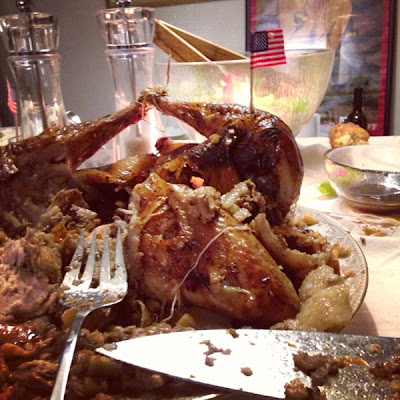 The long running Art Buchwald piece in the Washington Post was a comedic look at Thanksgiving with the poignant ending: “the fourth Thursday in November, American families sit down at a large table brimming with tasty dishes and, for the only time during the year, eat better than the French do.” Having spent a few Thanksgivings in France I’ve learned what a treat it is to celebrate here. (In fact, I will be celebrating 4 times this year! Life of an expat.) 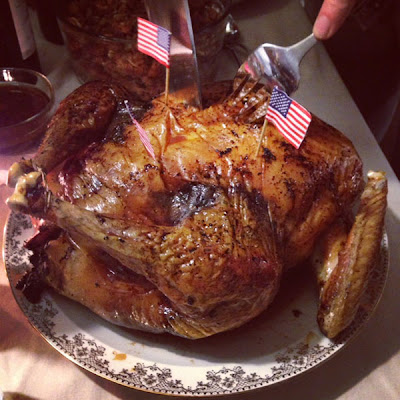 First lesson: celebrating with friends at “home” is the best, even better is when you invite French friends. I’ve met a few French friends who have come to love and cherish this holiday more than we do (one recounted her tale of her first American Thanksgiving experience with me the first night we met). Then: Plan ahead. More and more you can find boucheries [butcher shop] offering turkeys, but most of the time you should plan to order one ahead of time. Speaking of planning ahead, you may want to specify you would not like the head to come with your turkey. Next: You think it’s tough juggling everything in an American kitchen, try a quaint French one. Don’t worry, it still works! Having a friend with a “real” oven (not as common as one may think) always helps. When it comes to dinner time, realize that the French will not grasp the idea of a 2pm or 4pm meal. You may as well adopt the French habit of eating at 8pm if you don’t wish to be disappointed that the food is cold and your friends decide not to show up until 9pm. Trust me. During dinner seconds are embraced by all cultures (last night the French outnumbered the Americans significantly, which is always exciting), however, the French still have yet to fully embrace “leftovers” and the key role they play in this American meal each year. But that’s ok, just more for the Americans! 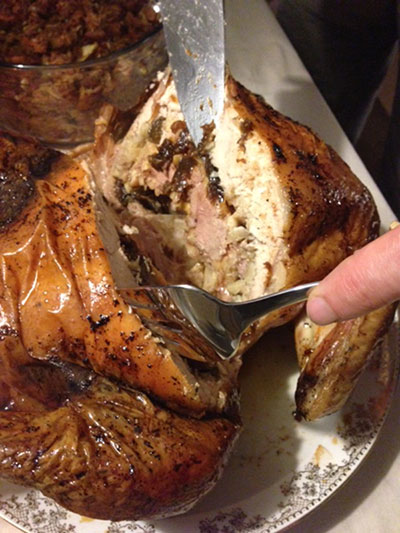 Last night’s Turducken – translation: chicken in a duck in a turkey each surrounded by layers of stuffing – was a delightful treat by my chef friend Jenni. It was actually really delicious (prune stuffing was the secret) and far superior to my friends’ attempt at one in 2007 (admittedly a bit too cajun). As you can see above [top image] in what I like to call “the Aftermath,” it was a huge success. I love that Thanksgiving also turned into one friend’s personal culinary challenge. Me? I just made the mashed potatoes. 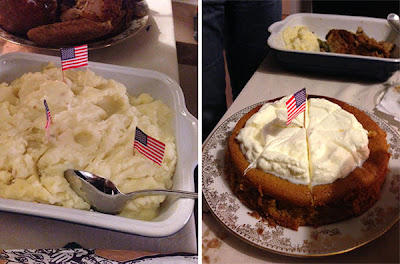 Ironically the American flags were a gift from a French friend who said he saw them in la cantine [cafeteria] at work yesterday and had to bring them. Despite what the pictures suggest, there were only 3 total, they just made the rounds, conquering all that stood in their way. Another victory for an American cross-cultural exchange in France! By the end of the celebration our French friends were suggesting we celebrate Thanksgiving every Thursday of the year.

Everplaces!How French Bureaucracy Changed How I Use Start-Ups + Gidsy + InDesign